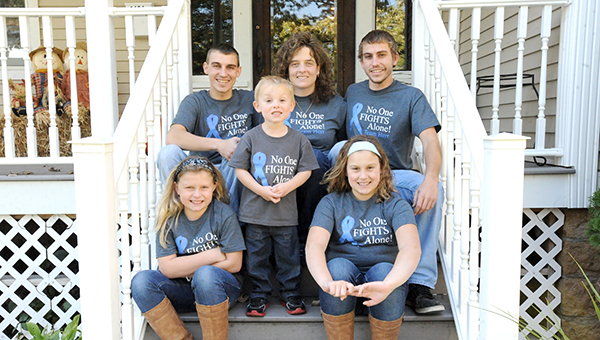 The memory of Doug Herr, a son, husband, father of five and kitchen manager at Hy-Vee in Albert Lea, will live on through those whose paths he crossed. Those who knew him said he really was the “smile in every aisle” and always put others before himself.

Described as a witty, fact-oriented, strong-willed man who always had a smile on his face and a bounce in his step, Doug lost his battle with cancer on Friday at home surrounded by his family.

Throughout his illness Doug was open with his children, and if they had questions he answered them. Even the youngest, 3-year-old Nathan, seemed to understand that his daddy was sick.

“The other night he made a comment that when daddy dies, sissies are going to cry,” said Brenda, Doug’s wife of 14 years. “I said, Mommy will probably cry, too. He reached out and gave me a hug and said, ‘I will take care of you.’”

And, while Doug was in the hospital, Nathan said another heartwarming statement about his daddy.

Along with Brenda and Nathan, Doug’s other children, Michael, 24, Mason, 22, Makenzie, 11, and Addison, 7, spent Friday afternoon remembering their dad.

The two oldest boys said a lot of times people tell them they look and act like their dad.

“It’s the biggest compliment they could pay us,” Michael said. “I won’t ever get tired of hearing that.”

Makenzie and Addison, Brenda said, were Daddy’s girls. He was teaching them to hunt.

The kids remembered the times they wrestled around with their dad, went on hunting, fishing and golf outings, and most of all his compassion and his jokes.

On one hunting trip Doug convinced Michael and Mason to grab a camera and take a photo of a bear he saw. The boys grabbed a camera to do so and ran down the road, but soon discovered the bear they were supposed to take a photo of was actually a dog who started barking and chasing them.

“He liked to do practical jokes,” Brenda said.

Even on the day Brenda and Doug were married, July 3, 1999, jokes commenced. After the ceremony in Grace Lutheran Church, the couple, their family and the wedding party rode on a manure spreader as the last float in the Third of July parade before heading to the reception at the Elks.

“He liked to party, have a good time and be an entertainer,” Brenda said.

All joking aside, Doug made sure that his family and friends were taken care of and appreciated.

On Oct. 7 Doug was supposed to attend a banquet in Rochester to receive a 20-year service award from Hy-Vee. Because he was at St. Marys Hospital, he was unable to receive the award. Al Weisert, the Albert Lea Hy-Vee store director and a friend of Doug’s for more than 35 years, brought the award to his home later on. Instead of a gift for himself, Doug had picked out a watch for Brenda. Then, on Oct. 13, Doug was insisting that Brenda bring him $50.

“He asked me, ‘You know what I wanted that money for? I wanted to get you flowers because I wanted you to know how much I appreciate you,’” Brenda said.

Doug’s last outing was on Monday. The Herr family went to Home Depot to buy a grill because he thought the family needed a new one.

Doug’s caring ways extended beyond his home to his job and the people around him.

“If there was anybody that needed something, he was the guy that stepped up to the plate to do it,” Weisert said.

As the kitchen manager at Hy-Vee, Weisert said Doug was a dedicated employee who was a friend to everyone.

“He brought his expertise in food, he brought fellowship, teamwork and dedication, and he always put his employees before him,” Weisert said. “He cared more about his customers than himself. He had a customer base that was second to none and followed him wherever he went.”

Brenda said even when Doug was sick he was putting in 10-hour days until he couldn’t any longer.

“Al Weisert and Hy-Vee were amazing,” she said. “They knew that him getting out in the public and working was like therapy for him and it kept him going,” Brenda said.

Brenda said her family has received a lot of support from their friends and the community throughout the journey.

One of the ways they reached out was by surprising the Herr family with a trip that would have fulfilled an item on Doug’s bucket list.

“They were going to send us to Hawaii because that’s something my husband would do,” Brenda said. “We didn’t make it, but he was so excited. He talked about it every night.”

More than 40 people showed up to the first planning meeting for the Herr family benefit and many others have sent cards, gift cards, flowers and donated to the cause.

“We’ve had such amazing support through the community, friends and family,” Brenda said. “Every time they come here to help us out, at the end they say, it’s nothing he hasn’t already done for us. He was so worried about taking care of us, and the irony of it is he already had because he took care of so many others and they are just repaying him.”

Doug first started experiencing symptoms about a year ago during deer hunting season. He kept taking antacids while he was out hunting and thought something was wrong. He later went in for an X-ray, but it didn’t show anything and the heartburn-like symptoms only got worse. He tried different antacids, but he didn’t think heartburn was the problem.

On Feb. 13 at Mayo Clinic Health System in Albert Lea, a scope was put down Doug’s esophagus so that doctors could look for a hiatal hernia, a condition where part of the stomach sticks upward into the chest through an opening in the diaphragm. Even though at 47, Doug was younger than most people diagnosed with the condition, he was diagnosed with Stage 4 esophageal cancer.

“It is the ninth cancer on the rise,” Brenda said. “It’s a silent killer. Usually by the time they find it, it’s too late.”

That’s when the Herrs started telling everyone they knew that if they had heartburn they should get it checked out.

“If my diagnosis saves one person then it was worth it,” Doug said after a friend got checked.

“It was never about him,” Brenda said on Friday.

Doug was told he should get his affairs in order. Even though he was young, Doug was told a surgery to remove the tumor was not an option.

“That wasn’t good enough for him. He wanted to fight,” Brenda said. “He went on to Rochester to get a second opinion and look for someone who was going to fight. Even after that, the fight was getting lost and we moved on again.”

Doug went to Cancer Treatment Centers of America in Chicago.

“It was an amazing place,” Brenda said.

But, while he was in Chicago, Doug had a scare. He went into cardiac arrest because of an allergic reaction.

“After that, he just didn’t want to treat far away. He wanted to be close to family and friends because he was scared,” Brenda said.

On Oct. 6 Doug started getting sicker and was losing blood. He was sent to St. Marys Hospital in Rochester on Oct. 7. He was there for five days before returning home. On Oct. 17, the family made arrangements for hospice to start.

“The five kids of his were what drove him to be successful. To this day I believe that; even through his illness,” Weisert said. “He fought the battle like I’ve never seen anybody fight. I know he fought it for his kids. He’s a good friend of mine and he’ll be sorely missed.”

A benefit for the Herr family will be from 4 to 8 p.m. Nov. 22 at Wedgewood Cove Golf Club. A meal will be served and there will be a bake sale, silent auction and live auction.

A CaringBridge site has been set up for Doug. Visit www.caringbridge.org and search Doug Herr to find the journal.

An obituary will be published in the Albert Lea Tribune this week. A visitation will be from 4 to 8 p.m. Friday at Bonnerup Funeral Service in Albert Lea. A funeral service will be at 9:30 a.m. Saturday at Grace Lutheran Church.