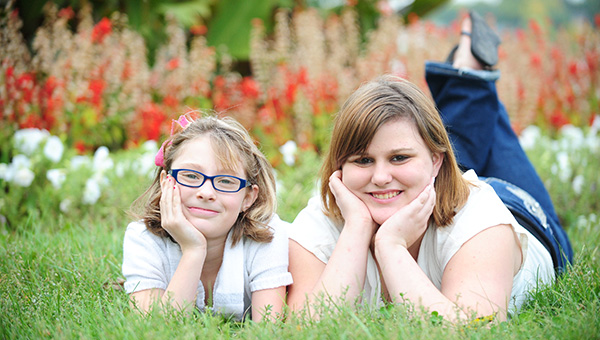 Allie Bassett, left, and her sister, Charlotte Carroll, will be competing in a pageant on Oct. 20 in the Twin Cities. –Brandi Hagen/Albert Lea Tribune

Two Albert Lea sisters will compete in a pageant later this month for the chance to win the Miss Junior Teen and Miss Junior Pre-teen titles for the Twin Cities. If they win, they advance to the national competition in Orlando, Fla.

Charlotte Carroll, 15, and her sister, Allie Bassett, 9, advanced from the first round of the competition on Sept. 22 after being interviewed by judges. Their trip to the Twin Cities is Oct. 20.

Carroll, the shy sister, had interviewed for a pageant prior to competing in this one but wasn’t able to advance. She said she was a little nervous but had an idea what to expect.

Bassett, the adventurous sister, was nervous but excited to participate in her first pageant. She was the one who initially received a letter inviting her and a friend to take part in the pageant.

Within a week of interviewing, Carroll received a letter letting her know she had advanced to the next round.

“I was jumping on the inside,” Carroll said. “I’ve wanted to do it since I couldn’t.”

It was a roller coaster of emotions, though, as time passed and no letter came for her little sister.

“I wasn’t going to do it without her,” Carroll said.

Melissa Bassett-Carroll, Bassett’s mom, said two letters had come to her email for Carroll, so after a couple days she called to see if there was an error and one was meant for Bassett. As it turned out, there was a mix-up and Bassett was also advancing in the competition.

“I thought, ‘Oh, my gosh, I’m going to be in a pageant!’’ Bassett said. “I was just so excited, I was almost jumping off the walls.”

One of the biggest obstacles the girls had to face to continue to compete is getting sponsors.

Being turned down by businesses was disappointing, Carroll said, but in the end it all worked out and both girls got sponsored. Now, they just have to focus on the competition.

Carroll said she is getting excited, but she’s also nervous.

“Ever since I was in a play in seventh grade, I’ve had stage fright,” Carroll said. “I want to do it to give me more confidence because I have none.”

Bassett is excited to compete, meet new people and model; especially because as a student at St. Theodore Catholic School she is used to wearing a uniform every day.

The idea of advancing to the national competition in Orlando is appealing to the two girls, but it’s not everything.

Carroll hopes she can advance so she can win a scholarship so she can someday become a parole or probation officer.

Bassett hopes she can win a scholarship so she can someday become a veterinarian.

Carroll used to be a cheerleader and now spends time doing community service including bell ringing and helping with a dog rescue.

Bassett also helps with a dog rescue and is on a bowling league.

At the pageant later this month, both girls will model casual and formal wear and interview with the judging panel. If either one wins the title in their respective category, they will advance to the national competition where more than $30,000 in prizes and awards will be given away.