Satirical opera ‘The Nose’ to be streamed live at Ross Center 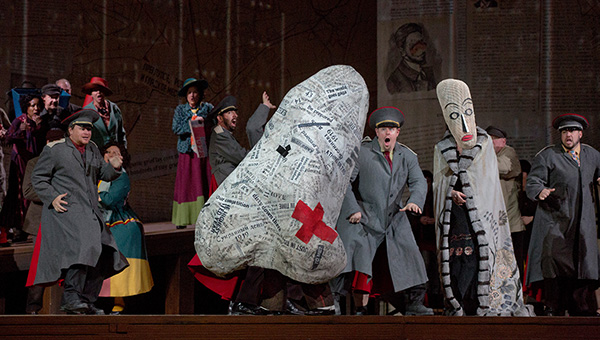 A scene of Shostakovich’s “The Nose” with the title character (actor Frank Colardo). –Ken Howard/Metropolitan Opera

An innovative and unconventional opera about a Russian official and his runaway nose will be transmitted live in Albert Lea this weekend.

“The Nose” by Dmitri Shostakovich will be streamed live at the Marion Ross Performing Arts Center at 11:55 a.m. Saturday. “The Nose” is one of the Metropolitan Opera’s most acclaimed productions of recent seasons. The opera is in Russian with English subtitles, and runs for about two hours with no intermission.

General tickets are $20, or $12 for students under age 30. New this year is a flex ticket, which offers a 10 percent discount on any purchase of five tickets.

A Meet the Met event will be at 12:15 p.m. Friday at Prairie Wind Coffee, which is a short presentation for opera fans wanting to know more about Saturday’s opera.

• To learn more about Saturday’s opera, Albert Leans can attend at Meet the Met event at 12:15 p.m. at Prairie Wind Coffee. The event is free and open to the public.

• The United Way of Freeborn County hosts a haunted walk from 7 to 10 p.m. starting at the Brookside Boathouse. Cost is $5, and the event is not recommended for children under age 10.

• A one-man show is coming to the Lighthouse Event Center. Alex “Crankshaft” Larson will perform a show at 7:30 p.m. Tickets are $15 in advance and are available at Marshall Street Music, Hy-Vee and Stadheim Jewelers in Albert Lea and at Coffee House on Main in Austin. Tickets are $20 at the door before the show.

• The Albert Lea Farmers Market will be open from 9 a.m. to noon at the Northbridge Mall parking lot.

• Doors open at 11 a.m. at the Albert Lea Eagles club for the Ladies Ducks Unlimited luncheon. Tickets are available at the door. There will be prizes and games.

• The Knights of Columbus hosts an Oktoberfest celebration from 7 to 10 p.m. Food will be served starting at 6 p.m. and will include brats, sauerkraut, potato salad and German beer. The Alley Katz band will perform.

• The Alden American Legion will hold a Halloween party from 8 p.m. to midnight. There will be a costume contest and karaoke. There is no cost to attend.

• Wedgewood Cove Golf Club hosts a comedy show at 8 p.m. The show features John Bush and Tim Schifsky. Tickets are $15 in advance and $20 the day of the show. Groups of eight or more get reserved seating, and the first 80 tickets sold include one free beer. The event is sponsored by Motor Inn and Leland Realty.

• The Kiester Firefighters Relief Association hosts a breakfast from 7 a.m. to noon at the Kiester American Legion. Menu includes pancakes, blueberry pancakes, French toast, scrambled eggs, sausage patties and a beverage. Donations will be accepted, and funds raised will go toward the fire hall addition project.

• Country Inn & Suites and Power 96 will host a Halloween party from 1 to 3 p.m. There will be complimentary Halloween bags for the first 1,000 children. Parents must accompany children, and donations of non-perishable food items are suggested.