On Oct. 12, about 25 families gathered in the gym of Hollandale Christian School to make pies. Most of the families whose children go to the school sold the pies for fundraising. Each pie was a 9-inch deep-dish that cost $12. About $7,000 was raised! 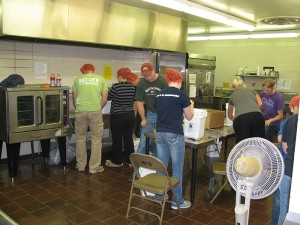 Volunteers work to make many pies at Hollandale Christian School.

Twelve people came at 7 a.m. to peel apples and cut them into slices. They used apple peelers to make the work go faster. At about 8 a.m., the pie makers began to arrive. Soon 36 people were making pies!

The children that were present had jobs, too. A few of the boys brought in crates of apples for the peelers and took apple peels and dough scraps to the garbage dumpster. Others filled pies, peeled apples and took the finished pies to a refrigeration truck parked in the back parking lot.

Some of the adults worked on the pie assembly lines. One person would measure out dough balls that weighed 7 ounces. The next two people would stand on either side of the table, facing each other. They took the dough balls and rolled them flat to make the bottom crust for the pie tins. After this, two people filled the pie tins with apple slices and cinnamon sugar. Then, the last people on the assembly line placed the top crust on and fluted the edges. Finally, the pies were wrapped in plastic and taken to the refrigeration truck.

Driving to the school on Saturday morning it looked like all the kids had pink hair. Right away when I walked in it smelled like fresh apples, pie dough and cinnamon. You would see apple peelings stuck to the ground and dough balls flying through the air. 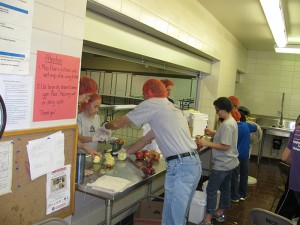 Students are among the helpers making pies for a fundraiser at Hollandale Christian School.

It was so loud it was like a train was there along with squeaky shoes, laughter, singing and great conversations. Some people had sticky hands because of dough, apples and of course sugar. If you were lucky you would get to taste the apples. This was a fun day for everyone!