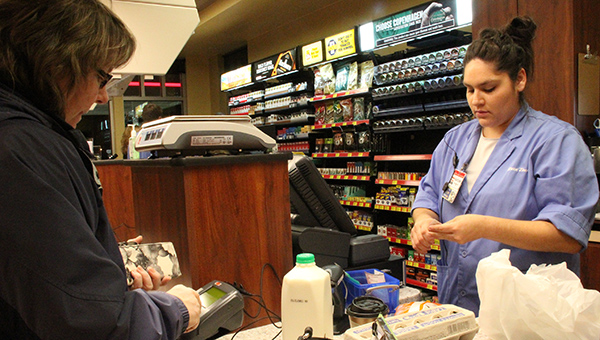 Kwik Trip opened the doors at its new store on Bridge Avenue this morning, greeting customers with more space than the chain’s other two stations in Albert Lea.

The store, 2611 Bridge Ave., offers 6,000 square feet. Many of the new stores are being built with additional space, said store manager Bill Bill Goebel, who was glad to be opening the place.

“It’s fun having the excitement of something new and fresh and clean,” he said. 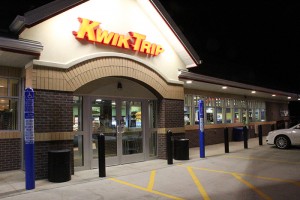 Lights on in the store and parking lot of the new Kwik Trip on Bridge Avenue alert customers this morning that the gas station is open.

He called the store “artsy” compared to the conventional stores. The other two Kwik Trip stations in Albert Lea are at 1210 E. Main St. and 906 W. Front St.

For instance, the heated food isn’t immediately in front of the doors. Hungry people tend to mosey around before deciding what they want, Goebel said. In conventional stores, they often would go right past the heated food, then come back, he said. 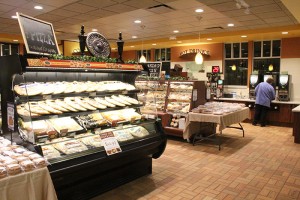 The Kwik Trip on Bridge Avenue is more spacious than the other two of its kind in town and features all of the same options of food and other goods.

There is a new flavored-coffee dispenser called SureShot. And the malt machines have animated touch screens.

Friendliness is always key at Kwik Trip, he said, and part of that is helping customers get in and out of the store swiftly. There are five registers, instead of the four found at each of the other two stores. There is a seating area, too, for customers who want to sip coffee or who don’t want to drive and eat.

“We are always trying to be better than the best,” Goebel said.

The store has a charging station for electric cars. It offers E85 gasoline, an ethanol blend. 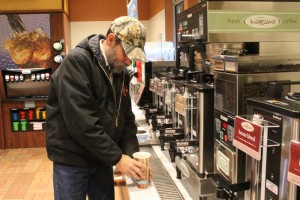 Rodger Mathans of Conger fills a cup of coffee this morning at the new Kwik Trip on Bridge Avenue. The store opened at 5 a.m., in time for the long Thanksgiving weekend.

There is recreational fuel, too, for boats, lawn mowers and similar engines. Starting in the spring, it will offer compressed natural gas. This store has diesel fuel, too, and can serve the big rigs.

Goebel said there are recycling bins out front, so customers can recycle unwanted items in their car, instead of sending it to the landfill. He said promoting green is a major push for Kwik Trip. The store uses low-flow faucets and LED lighting. 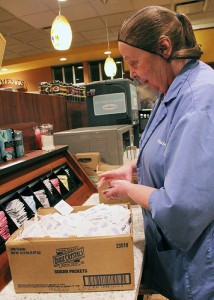 The store has 36 employees. Normally, Kwik Trip stores open on Thursdays, he said, but this one was bumped ahead by a day because Thursday is Thanksgiving Day. Like many gas stations, the store will be open on the holiday to serve travelers.

Goebel said the location is “great.” He said the store ought to attract Interstate 90 travelers and could be a handy stop for north-side Albert Leans who leave the city by taking the Bridge Avenue exit on the freeway or who go past on their daily commute.

One early riser today was Dick Rye of Albert Lea, who works near the Albert Lea Municipal Airport. He said he will become a regular.

“It’s a lot easier than next door, a lot more options,” he said, referring to Hy-Vee Gas a block to the north.

Of course, Hy-Vee Gas does have plans to expand its Bridge Avenue location to about 4,300 square feet. It is waiting on city officials to complete their studies for the proposed alignment of Plaza Street.

Rodger Mathans of Conger said the location works well for his drive to work.

“I’ll be here probably every day,” he said.