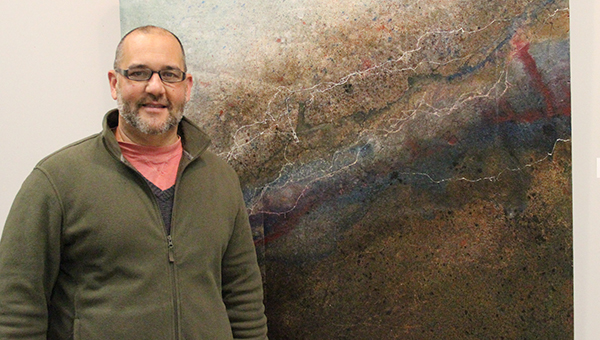 James Petersen stands near one of his larger pieces now on display at the Albert Lea Art Center. –Kelli Lageson/Albert Lea Tribune

Two artists will be showcased at the latest exhibit at the Albert Lea Art Center.

One of those artists is local pastor James Petersen. Petersen is the senior pastor at Crossroads Church and has been creating all kinds of art since he was in elementary school.

“This particular show represents my work in the last 18 months,” Petersen said. 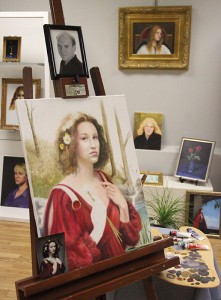 Stephen Froiland, an artist who is now deceased, is featured in the Albert Lea Art Center’s latest show. The painting on the easel is an unfinished work by Froiland.

He creates sculpture-like art with dimensions, textures and different materials. Recently he has started using Granicrete, which is often used in countertops, to add colors and textures to pieces. And he likes to use things that most people would consider junk like spare pieces of styrofoam or old closets doors. 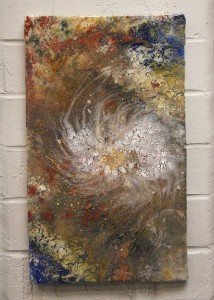 Artist James Peterson said he likes to be creative with vibrant colors and textures in his works.

He creates what he calls functional art, like lazy susans that can be used to hold condiments on a table or as a centerpiece. Petersen said he is deeply creative and emotional and said his art reflects those qualities.

In stark contrast to Petersen’s colorful, texturized art is the art of Stephen Froiland in another exhibit. Froiland died in 1979 at the age of 45. He had a debilitating form of Crohn’s disease and later in his life had cancer. The show at the Art Center features many portraits from his collection.

Froiland primarily painted with oil or acrylics. His family contacted the Art Center this year to ask about a show for Froiland’s work. Froiland did classical portrait paintings, but his collection includes landscapes and still lifes, according to the Art Center. 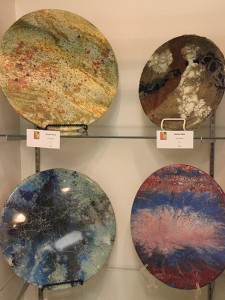 James Peterson creates what he calls functional art, like these pieces that can be used as a lazy susan on a table.

One unique feature of Froiland’s work is an unfinished portrait that will be on display along with his easel and pallet. Froiland, the son of Kermit and Lavonne Froiland, grew up east of Albert Lea and graduated from high school in 1979.

The galleries featuring the work of Petersen and Froiland will be open from 10 a.m. to 2 p.m. Tuesday through Friday through Dec. 27. An open house was held Tuesday. 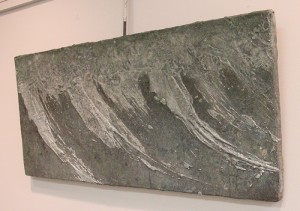 James Petersen titled this piece “Monsoon,” and it reminds him of a tropical storm.

Art on Broadway, the shop at the Art Center, is hosting jewelry artists Julia Olson, Betsy Schroeder, Laura Lunde and Susan Roskens throughout November and December. The shop is open from 10 a.m. to 2 p.m. Tuesdays through Fridays.

Additional information about this show and other upcoming events may be found at www.thealbertleaartcenter.org. The Albert Lea Art Center is located at 224 S. Broadway in Albert Lea.