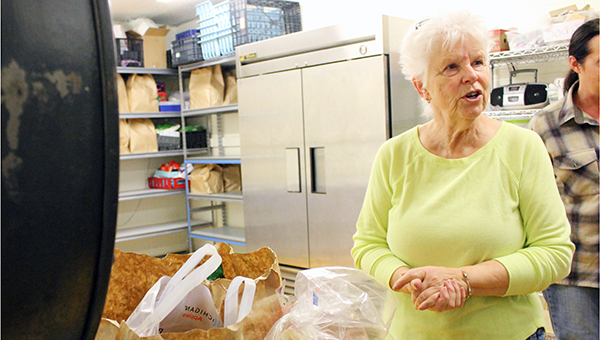 A little more than a week into reductions in the federal Supplemental Nutrition Program, area food shelves are beginning to notice the effects of the changes.

The Albert Lea Salvation Army’s community meal site has gone from serving about 65 meals a day to about 80 meals a day, and more people are coming into the food shelf for assistance, said Capt. Jim Brickson.

“Our food pantry is going crazy,” Brickson said. “We can’t keep the food pantry full or even being close to full since the changes.”

Benefits were cut to more than 47 million people across the country as a temporary boost to the program — known commonly as food stamps — ended without a new budget to replace it.

Under the program, a family of four is seeing a cut of about $40 a month, said Brian Buhmann, director of the Freeborn County Department of Human Services.

Buhmann said there are 3,100 people in the county who benefit from the SNAP program, including 1,900 adults and 1,200 children. 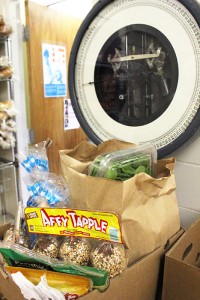 A box of food is weighed in the food shelf of the Albert Lea Salvation Army Wednesday.

County staff determine how much food stamps a person or family gets based on the federal poverty guidelines. They look at income, whether anyone in the family works and how many people are in the family, among other criteria.

“With that $40-a-month cut, some of those families may go nine, maybe 10 meals that they may have to skip,” Buhmann said.

He said starting Nov. 1, able-bodied adults without dependents saw additional changes. Anyone considered able-bodied who is over 18, who does not have children or a job, will only be able to receive benefits for three months instead of for an indefinite amount of time.

“That might be one of the bigger hits,” he said.

Buhmann said he had one client who came in and was worried about the cuts. The person asked why the changes were being made.

He said he emphasized the county is simply making changes based off of federal guidelines.

“If we could let you keep the benefits and you’re entitled to benefits, we’d let you do that,” he said.

Buhmann said the changes are coming because the SNAP program is part of the farm bill, which has not yet been approved by Congress. People had been getting additional dollars under President Barack Obama’s 2009 stimulus bill, but those additions have expired.

“Until they work together and stop pointing fingers, the rest of us are going to suffer,” Buhmann said.

He estimated that food stamps have been a part of the farm bill since the 1950s, in many times as a bargaining chip for passage.

“It’s unfortunate politics plays a part in what we’re doing, but it does,” Brickson said.

Making up for the difference

As more people turn to the Salvation Army for help, the organization is forced to be more creative and figure out how it will meet the needs of the community.

Brickson said families are allowed to come into the food shelf once a month and can come into the meal site every day it is open.

The Ecumenical Food Pantry housed at First Presbyterian Church also services people in need of food in the county on a monthly basis.

Volunteer Margie Schock estimated the pantry has served about 400 households since July.

She said she thinks it is too soon to see how the changes in the SNAP program will affect the community as they have only been in effect for one week.

“We’ll have to just wait and see,” she said.

She said, generally, there are more people who suffer from hunger in the community than people may be aware.

“The clients who come are always kind people,” she said. “They appreciate what can be done for them.”