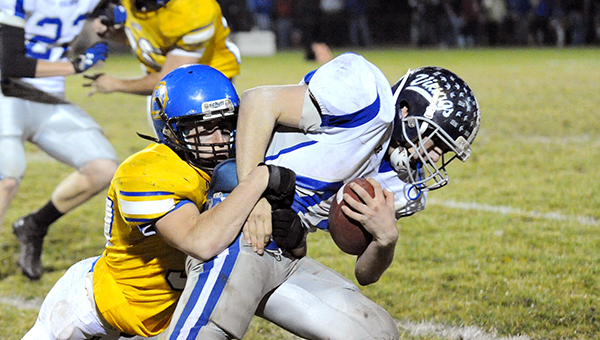 Coleby Bratrud of Northwood-Kensett drags a Don Bosco defender Monday during the second round of the 8-Man football state playoffs. Bratrud rushed for 57 yards and a touchdown and tied Aaron Peterson with a team-high 8 tackles. — Micah Bader/Albert Lea Tribune

GILBERTVILLE, Iowa — Northwood-Kensett met a familiar foe in the second round of the 8-Man football state playoffs on Monday.

Don Bosco and Northwood-Kensett — both teams in District 3 — played the last game of the regular season against each other, and Don Bosco won 64-50.

On Monday, the Vikings’ defense held Don Bosco to fewer than 50 points, but Northwood-Kensett’s offense wasn’t able to re-create the figures it had two weeks prior.

“Defensively, we played much better this time around,” said Northwood-Kensett head coach Dave Capitani. “We just weren’t able to get the ball in the end zone as much.” 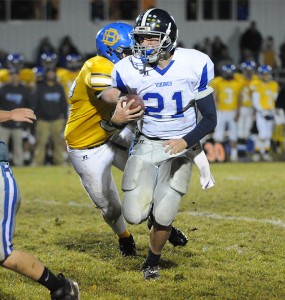 Josh Einertson of Northwood-Kensett carries the ball Monday during the second round of the 8-Man football state playoffs. Einertson, a sophomore, rushed for 41 yards on 17 carries and passed for 63 yards on six completions. — Micah Bader/Albert Lea Tribune

The Vikings were eliminated in the second round of the state playoffs with a 48-20 loss at Don Bosco.

After an early touchdown by Don Bosco, Northwood-Kensett tied the game at six on a 12-yard run by Brandon Brockman and took its first lead of the game (8-6) with the two-point conversion on a run by Mitchell Athey.

The Vikings’ lead lasted a matter of seconds, because the ensuing kickoff was returned for a touchdown by Don Bosco return specialist Jake Hogan. Hogan also played quarterback, and he was effective running the ball out of the shotgun in an empty-back set. He rushed for 270 yards on 29 carries and had three rushing scores in the second quarter.

However, it wasn’t all roses for Don Bosco’s offense in the second quarter. Northwood-Kensett’s Logan Nielsen gave the Vikings life, when he recovered a fumble inside the Dons’ 10-yard line. Two plays later, Northwood-Kensett punched the ball across the goal line to cut Don Bosco’s advantage to three possessions (32-14).

In the second half, the Vikings mounted two drives that chewed up big chunks of the clock, but resulted in no points. To start the third quarter, Northwood-Kensett drove the ball deep into the Dons’ territory — even converting on fourth-and-two from Don Bosco’s 30-yard line. However, the drive ended with an interception by Don Bosco in the end zone. In the fourth quarter, the Vikings duplicated that result when they drove into the red zone but turned the ball over on downs at the Dons’ 13-yard line.

“We had a couple of opportunities when we didn’t get points when we needed to,” Capitani said.

With 6 minutes, 35 seconds left in the game, Brockman rushed for his second touchdown of the game — a 47-yard run — but Don Bosco led 40-20 after the extra point was unsuccessful.

Despite the loss, the Vikings came a long way since switching to 8-Man football last season.

“We’ve just been learning it,” said Northwood-Kensett’s Aaron Peterson, who tied Coleby Bratrud with a team-high eight tackles. “Last year was our first year in the system, and we didn’t know the ins and outs of it. This year, we became better as a team.”

That fact was evident in the win and loss columns. Northwood-Kensett’s overall record improved from 4-5 last year— which included a forfeit win — to 7-4, a third-place finish in District 3 and a 1-1 record in the state playoffs.

“I know there were people who had us picked sixth or seventh in our district at the beginning of the season,” Capitani said. “But I think our kids worked hard, stepped up and continued to get better each week. They’re a great group. It was a joy to coach them.”