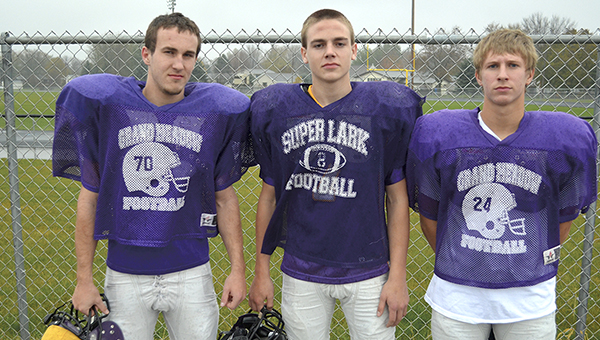 From left are Grand Meadow’s Jordan Miland, Michael Stejskal and Blake Olson. The trio made big strides for the Superlarks this season. Grand Meadow will play in its sixth state tournament in school history. — Rocky Hulne/Albert Lea Tribune

Jacobson rushed for 1,376 yards and 25 touchdowns as a running back, and he racked up 127 tackles and seven sacks as a linebacker.

Grand Meadow began the section playoffs in the same section as Glenville-Emmons. The Superlarks were the No. 3 seed, and the Wolverines were the No. 8 seed.

There’s a lot more to the Superlarks (10-1 overall) than Jacobson. Grand Meadow received a boost from plenty first-year varsity players this year, including juniors Blake Olson and Jordan Miland and sophomore Michael Stejskal.

“We’ve had so many guys step up, and they’ve steadily improved as the season has gone on,” Grand Meadow head coach Gary Sloan said. “That’s why we’re playing our best football right now.”

Mountain Lake (11-0 overall) comes into the game with a strong passing attack that features 6 foot, 6 inch quarterback Carter Kirk, who is also the Wolverines’ leading rusher.

All three players are first-time starters for Grand Meadow, but they learned plenty by watching the Superlarks take second in state last season.

“We saw a lot of good starters last year, and we’ve taken they’re place,” said Olson, who scored a defensive touchdown in a 31-14 win over Spring Grove Friday. “It’s like a dream for every kid to keep playing as long as you can and getting to state.”

Stejskal watched his older brother, Perry, play for the Larks last season, and he’s now playing Perry’s position on offense at full back. He’s the lead blocker for Jacobson, and he’s also run for 227 yards and three scores of his own this season.

The development of the first year players have been huge for Grand Meadow as the team has just three seniors on its roster. Grand Meadow quarterback Trenton Bleifus, who is one of those seniors, said he always thought the Larks would be fine with their younger roster.

“They’re leaders too and they’ve stepped up,” Bleiufs said. “I knew they would step up and they’re good athletes.”

Grand Meadow will play Mountain Lake in the state quarterfinals at noon at Southwest State University in Marshall.