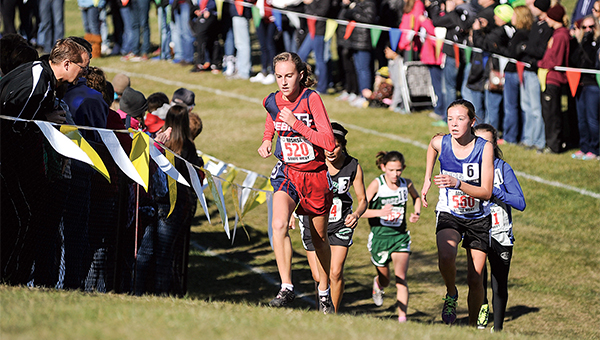 NORTHFIELD — United South Central’s Beth Stevermer is an All-State cross country runner, and she’s not even in high school yet.

The Rebels’ eighth-grade running phenom added that to her All-Conference and All-Section accolades garnered earlier this season.

Stevermer earned 14th place out of 174 runners Saturday at the Class A state cross country meet at St. Olaf University in Northfield.

“At the state meet, it’s very common for athletes to either get caught up in the excitement and go out a little too fast, or lose confidence mid-race and have a meltdown,” he said. “Beth did neither. She stuck to the plan and turned in her best race of the season.”

After one mile, Stevermer was in about 24th place, Viesselman said. A half-mile later, she moved up three spots, and in the final mile, she passed seven more runners to finish in the top 15.

“Beth ran a perfect race,” Viesselman said. “She stayed within herself through the early stages of the race and ran a very strong last mile to finish among the top runners in the state.”

Records have been recorded since 1970 for athletes from Wells-East, USC/Alden-Conger and USC, Viesselman said. Since then, runners finished in the top 25 18 times at the state meet or were in the top 10 in the final season rankings to earn All-State honors.

“That puts Stevermer in a select group both at the state level and locally,” Viesselman said.

Prior to the state meet, Stevermer never finished outside the top five. She won three consecutive meets starting at Zumbrota-Mazeppa on Sept. 26 and continuing with first-place finishes at Waseca and at USC’s home meet in early October.

She was also the runner-up at four meets, including the Gopher Conference meet at Mankato Loyola and the Section 2A Meet at Montgomery Golf Course.