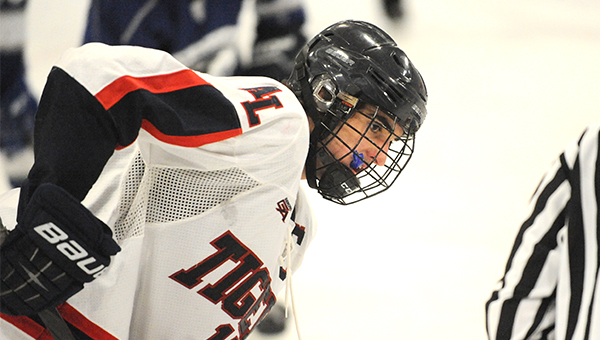 Van Zelenak of Albert Lea prepares for a faceoff against Owatonna on Dec. 5. Zelenak scored the Tigers only goal in the game. He leads Albert Lea with six goals on the season through seven games. — Micah Bader/Albert Lea Tribune

When Van Zelenak is around the puck, good things happen for the Albert Lea boys’ hockey team.

For the second straight season, Zelenak is leading the Tigers in goals scored and assists. 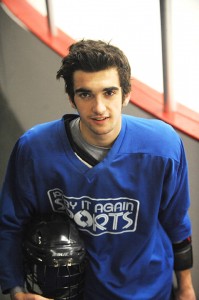 Last year, he lit the lamp 14 times and tied Andrew Thompson with a team-high nine assists through 25 regular season games.

“Being a senior captain and being motivated like he is, he works hard at practice and in games,” Albert Lea head coach Roy Nystrom said about Zelenak. “His work ethic is good.”

Zelenak said he’s been on the ice since he was 5 years old. Its a tradition in his household. His father, Mike Zelenak, skated for Hill-Murray High School in Maplewood.

“My dad played when he was growing up and so did all of my uncles,” Zelenak said. “As soon as I could, I got a stick and started skating.”

That’s one of the areas that Nystrom said Zelenak made strides during his three years of varsity action.

“His skating has improved a lot, but his biggest improvement is his puck handling and shooting,” Nystrom said. “His entire game is pretty good.”

Zelenak plays the center position, a spot that covers more ice than any other position.

“He’s played center all the way up the line, and there was no sense in putting him in another position,” Nystrom said. “He’s able to utilize his talents to help our wingers.”

Playing for Nystrom — a former player at the University of Minnesota and a coach with 659 wins — is a special opportunity for Zelenak.

“I like it a lot,” Zelenak said. “He (Nystrom) has a lot of experience, and he’s been around the game for a long time, so he knows what he’s doing.”

The goal for the season is to get to the state tournament, Zelenak said. Last year, the Tigers beat La Crescent 7-1 in the first round of the Section 1A tournament before losing at Northfield 3-2.

Nystrom said Zelenak and his other two captains have stepped up after the team graduated a group of nine seniors, each of whom played significant roles.

“He (Zelenak) is definitely a leader along with our other two captains Andrew Thompson and Lucas Peterson,” he said.

The Tigers (3-4 overall, 2-4 Big Nine Conference) are off to a slower start than last year when they were 4-3 through the first seven games. However, this year’s group will try to avoid the six-game losing streak that followed for last year’s team.

Next, Albert Lea will play Cambridge-Isanti, Simley and Farmington at the Simley Invitational from Dec. 26 to 28.