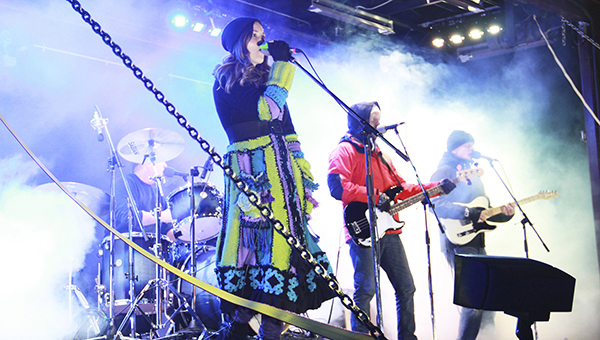 AUSTIN — A temperature of 6 below couldn’t keep the holiday spirit from chugging into Austin Monday night.

The Canadian Pacific Holiday Train returned to Austin and drew more than a hundred spectators behind the former Milwaukee Road Depot, even though the National Weather Service warned of wind chills around 20 below when the train pulled in a little after 6:30 p.m. 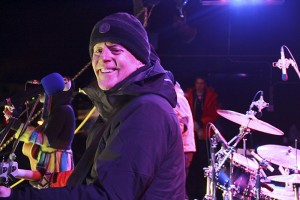 Willy Porter smiles as he performs on the Canadian Pacific’s Holiday Train Monday night in Austin.

The brightly colored train, decked out in hundreds of thousands of lights, featured a half-hour performance of holiday tunes by Willy Porter and The Claytones, but that was only part of the spectacle. The Holiday Train is fighting hunger, as the train attracts many donations to food shelves at each stop. In Austin’s case, donations went to the Austin Salvation Army.

“These folks here are helping their neighbors,” said Andy Cummings, a spokesman with Canadian Pacific.

To Cummings, people braved the frigid temperatures because of food shelves’ needs.

“The fact is that the need is still there,” he said. “One in six Americans continue to turn to food shelves. The need is there, and I think the community wants to come out and have good time.”

Canadian Pacific presented a $4,500 check to Lt. David Amick of the Salvation Army. During the Holiday Train’s 15 years, Canadian Pacific has raised $7.4 million and 3 million pounds of food for food shelves all across the U.S. and Canada, according to Cummings.

Amick and Salvation Army officials were on hand with a truck and bins to collect food donations. By the end of the night, the bins — as well as the back portion of the truck — were filled with food.

Most people were happy to attend despite the bitter cold. Dan and Tiffany Hatfield brought their children, Darrell, 8, and Eli, 7, out to see the train because it was, as Tiffany said, good clean fun.

“This is wonderful for kids and family to get together,” Tiffany said.

“It’s good for the kids to have something to do,” Dan added.

When asked if it was worth braving the cold, Dan said it certainly was.

Stephen Blum brought his grandchildren Isaac, 10, and Naomi, 8, out to see the train.

“I thought it was pretty good,” Stephen said, noting it was worth braving the weather.

Naomi had a simple review: “Awesome,” she said afterward.