How to tell a trumpeter swan from a tundra swan

“Everything is nearly copacetic. Things are better than the year my goldfish ran away. That was the year our teacher gave us the IQ tests. You still owe the school five points.”

“Did you have a nice Thanksgiving?” I say. 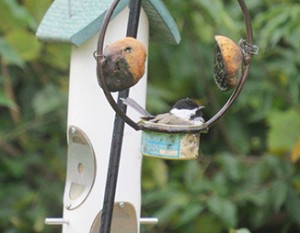 A chickadee rests in a feeder.

“All the family members made it. I don’t know how they were all able to worm their way out of those ankle bracelets. There was a bit of sad business. After my fourth helping of stuffing drenched in gravy, I lost my ability to belch. That caused me to stay awake while watching the football games on TV. Those things take forever and the commercials are endless. I’d always slept through them before. I’m OK now, and I still believe that the world would be a better place if it were covered in gravy. Cabela’s had a Black Friday special. Everyone except you and I had a Black Friday special. Cabela’s offered a total of $8,700 in prizes to the first 600 in line by 5 a.m. My sister Cruella hates camping, hunting, fishing, boating and hiking, yet she stood in line for more than 12 hours to be one of that 600.”

“Why would she do that if she doesn’t enjoy camping, hunting, fishing, boating or hiking?” I ask.

“Because she loves shopping.”

“Tie a Yellow Ribbon Round the Old Oak Tree” is a song by Tony Orlando and Dawn that was a worldwide hit in 1973. The song was about a prisoner who had completed his sentence, but was uncertain if he’d be welcomed home. He wrote his love, asking her to tie a yellow ribbon around the old oak tree in front of the house if she wanted him back. He asked the bus driver to look, as he feared there would be no ribbon. Bus passengers cheered after seeing 100 yellow ribbons tied around the tree.

A woman told me that she’d tied a yellow ribbon around an old oak tree in her yard in the 1970s. A squirrel swiped the ribbon and tied it around an old squirrel nest.

Research showed that a chickadee’s brain grows up to 30 percent larger during times when they need to find food for caching. The brain expands, adding new nerve cells to help it remember where it had stored food. In the spring, when memory is less important, the brain shrinks to normal size.

Another study showed that birds living in harsher conditions find more food than those in milder climates, are better at finding their caches, have better spatial memories and have larger brains than the same species farther south.

Bob Holtz of Roseville wrote, “Watching streaks in sports come to an end is a fairly common experience. I suspect a lot of streaks come to an end in the birding world also. I had one of those days today (Nov. 28). I knew it would happen someday, but one still hopes it will go on just a little longer. In 2010 I decided to see how many days I could observe chickadees during that year. I missed on five days. Trying again in 2011 today. It was a day on which I spent a lot of time indoors for a large family gathering. My streak ended at 675 consecutive days. That doesn’t include days when I was not in Minnesota, like 12 days this July while in Ecuador checking on their birds. When one does this type of thing, one sets his own rules. Those were mine. I loved it. It was surprising how many times I would look out at my bird feeders, see a chickadee come flying in and feel a big smile spread across my face. Glad I did it, but sorry to see it end. Of course, there always tomorrow!”

John and Penee McGaughey of Albert Lea asked how squirrels find buried acorns in deep snow. Memory may play a minor role, but the squirrel’s ability to locate stored food is mostly due to its keen sense of smell. They fail to recover most of the nuts they bury, unintentionally planting oak trees. A gray squirrel is far more likely to bury a red oak acorn, which is rich in fat and sprouts in the spring, than a white oak acorn, which has less fat and tends to germinate in the fall. The white oak acorns are eaten rather than stored.

Suzy Routh and Cindy Baier of New Richland wondered what kind of swans were on St. Olaf Lake. The trumpeter swan is larger than the tundra. The difference is obvious if the two species are together, but is difficult to judge in isolation. Bill color is black in both species, but most tundra swans have a yellow spot in front of the eye. Immatures of both species are gray-brown. Trumpeter swan voices are a gentle honk, deep and resonant, like a toot on a trumpet or French horn. Tundra swan calls are a varied bugling, higher pitched than trumpeter calls. They can sound similar to dogs barking.

Karen Wright of Mankato wrote, “My son Grant was observing a bird outside our window and noted how fluffy it was. He said it looked like a cartoon character. How do they fluff their feathers? Do they grow more feathers for winter?”

Birds fluff their feathers to keep warm. Feathers are good insulation. When fluffed, they create air pockets, which trap heat close to the body and provide wind protection. Birds are able to fluff feathers thanks to tiny muscles that move feathers much the way the hairs on our arms stand up when we get goosebumps. Many birds do grow more feathers just as mammals grow winter coats and humans don winter clothing.

“People may say I can’t sing, but no one can ever say I didn’t sing.” — Florence Foster Jenkins

“We need the tonic of wildness.” — Henry David Thoreau