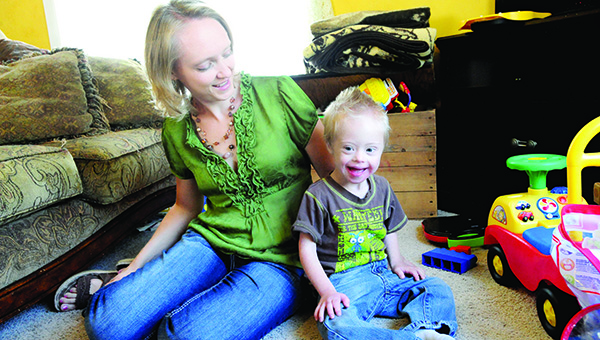 Kaiden Hoelz and his mother, Anne, play on the floor in their living room in Albert Lea. The family started following the Paleo diet a few years ago after Kaiden started having seizures. The seizures have since stopped. –Brandi Hagen

The love between Anne Hoelz and her 4 1/2-year-old son, Kaiden, is crystal clear.

Though Kaiden cannot speak a word, it’s evident by the smile that spreads across his face as he sees his mother and reaches out to her.

She and her only child have a special bond.

Too much for Kaiden

About four years ago when he was almost 8 months old, Kaiden, who has Down syndrome, began having benign myoclonic seizures.

His mother said he stopped smiling, and by the time he was about 11 months old, he said his last word.

“It was heartbreaking,” Anne said. “I had a happy little boy, but where did he go?” 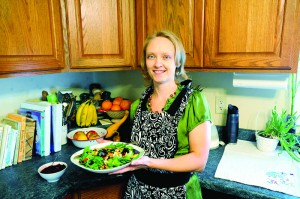 Anne Hoelz of Albert Lea stands in her kitchen with some of the recipes she has created for her cookbook “Cavemom’s Cooking.”

Prior to the seizures, she and her husband, Nick, had been using flashcards with Kaiden to help him learn, and despite the Down syndrome, they thought he was developing relatively well.

That development came to a halt when at Kaiden’s six-month visit to the doctor, the doctor instructed Anne to give him iron supplements and to begin feeding him iron-fortified cereals and solid foods because he had become anemic. He was also given the DTaP and hepatitis B vaccinations.

“All of this was too much for Kaiden’s little system,” Anne said.

“When he was having the seizures, you just felt helpless,” she said. “He would cry and all you could do was comfort him and hope that the seizure stops.” 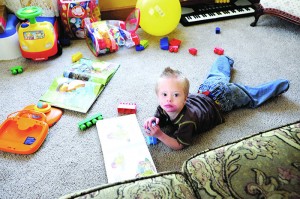 Kaiden Hoelz plays with books and toys on the floor of his home.

Shortly after the seizures started, she noted that when she gave Kaiden sweet potatoes and carrots, his seizures intensified.

She went to his neurologist with her observation, but the idea that his diet and seizures were linked was rejected.

“The neurologist we saw told me outright that he was sure diet had absolutely nothing to do with the seizures,” she said.

But she suspected otherwise.

Despite the doctor’s opinion, Anne began researching Kaiden’s vaccines, the dosage of his iron supplement and her antibiotics.

Labels for all listed seizures as a possible side effect. After she researched that carrots and sweet potatoes intensified the seizures, she stopped feeding him those foods. She then discovered that some people with Down syndrome do not process beta carotene well.

She also stopped the iron supplements because Kaiden had started spitting them up.

A light in the darkness

At the worst, Kaiden had six clusters of seizures a day with one spasm every 10 to 15 seconds for anywhere from 10 to 45 minutes.

“He would scream and cry after each spasm,” Anne said. “These clusters would happen at random times of day and night. As a parent you feel so

frustrated and want to cry right along with them.”

On some of the remedies, his seizures were reduced down to an average of four to 10 single spasms per day for three months, and Kaiden didn’t cry nearly as much.

She began keeping a log of Kaiden’s seizures, along with what he ate.

That’s when it all clicked.

She noticed when Kaiden ate specific types of food, such as tomatoes, potatoes and peppers — which she later discovered are in the nightshade family of foods — his seizures would spike. “Nightshade” is the common name used to describe more than 2,000 species of plants. She found out that substances in these foods can sometimes impact nerve-muscle function.

She eliminated those foods from both her and Kaiden’s diet and saw the seizures drop to one to three per day. They went on a strict Paleo diet, which eliminates grain, gluten, dairy, legumes and nightshade vegetables.

Eventually, in combination with a calcium supplement, the seizures stopped. His last one was on May 28, 2010.

“Within one week of being seizure-free, Kaiden became so much more alert, so much happier,” she said. “He used to smile all the time before the seizures started and during the time he had them, a smile was a pretty rare thing.”

In four to six months, Anne said Kaiden excelled. He began standing and supporting himself, and she said within six weeks, he had gained nine to 12 months of development.

Anne shares her story of her heartbreaking experience and how her new eating routines changed the family’s life in a cookbook called “Cavemom’s Cooking.”

It features dozens of recipes. When she’s not making new recipes, Anne sells other homemade products on Etsy.com. The family lives in Albert Lea.

Anne has sent letters to Kaiden’s neurologist about how Kaiden’s seizures stopped and to other universities, Down syndrome centers and epilepsy centers, in hopes it could help others. She received only one letter in response.

Now, the whole family is on the Paleo diet, and Anne said it has been worth it. While it was an adjustment at first, she said she thinks they are all healthier from it.

“It’s amazing what you can accomplish when you have to, when you do it for someone you love,” she said.

Cook together in a saucepan. Boil, reduce to desired consistency.

Mix to taste.
Serve over salad.

Layer ingredients on a bed of leafy greens.