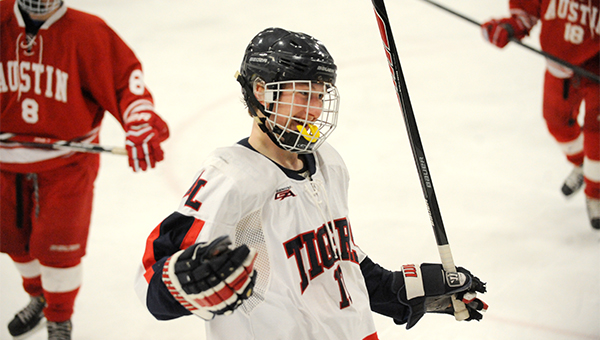 The win came after the Tigers beat the Packers 3-0 at Austin in the Albert Lea’s season opener. Austin was already 0-1 at that point with a 7-3 loss at La Crescent.

In the first meeting between the Tigers and Packers, Albert Lea scored all of its goals before the third period. But on Saturday, the Tigers entered the final period with the score tied at 0. 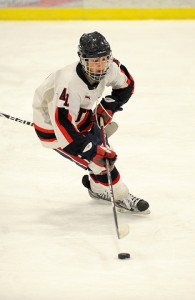 “We played hard — our boys always play hard — but we just need to finish more,” said Albert Lea head coach Roy Nystrom. “When we’ve got to wait around for two periods to score a goal, it gets pretty intense.”

Albert Lea goalie Garrett Matz had 10 fewer shots on goal to deal with than he had in the first game against Austin, and he continued to be an iron curtain.

“He’s solid in the goal, and he stopped everything they threw at him,” Nystrom said. “His save percentage is well above 90 percent, and his goal-against average dropped again.”

Albert Lea lit the lamp 6 1/2 minutes into the third period with a power-play goal by Van Zelenak. Matt Cheever was credited with the assist. About 3 minutes later, Zelenak found the net again, and assists went to Cheever and Dalton Flatness.

Zelenak leads the Tigers with 12 goals on the season, while Cheever and Flatness are tied with a team-high six assists.

In the first meeting, each team had one infraction. The rematch was more physical as Albert Lea had six penalties and Austin had five.

Albert Lea and New Prague could meet in the postseason as both teams are in Section 1A.

The Trojans (12-2-2 overall, 7-0-1 Missota Conference) are on an eight-game winning streak dating back to Dec. 27. However, five of those games were one-point wins. Their latest win was a 6-3 home victory against Northfield on Thursday.