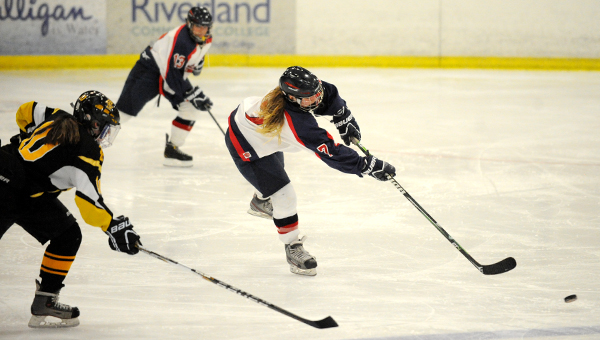 Despite getting more looks at the goal than Mankato East/Loyola, the net eluded the Albert Lea girls’ hockey team Tuesday at Albert Lea City Arena.

The Tigers outshot the Cougars in the first and second periods but lost 6-0.

“We had a lot of chances,” said Albert Lea head coach Laura Hillman. “We couldn’t finish, but we played with a lot of heart. We’ve been through a lot this year, and it was good to get out there and play as a team.”

In the first period, the Tigers outshot the Cougars 14-8, but Mankato East/Loyola scored twice and Albert Lea was held scoreless.

Second period, same story. This time, the Tigers had 11 shots on goal compared to four for the Cougars. However, Mankato East/Loyola made half of their shots to extend its lead to four goals.

In the third period, the Cougars outshot Albert Lea 13-8 and tacked on two more goals.

Defensively, Hillman said she was impressed with the play of freshman Maddy Funk.

“She (Funk) was originally a forward, but she was thrown back on defense with all of our injuries,” she said. “She’s been doing an awesome job there.”

The Tigers have two games left before the Section 1A playoffs start Feb. 5. Both games are at home.