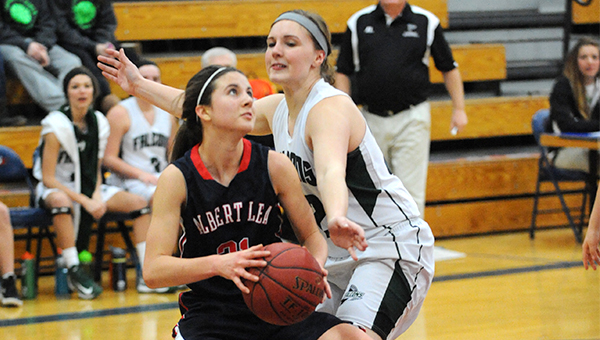 The Tigers rebounded Friday with a 56-37 home win against Faribault to sweep the regular season series.

After the opening tip, Albert Lea was cold from the field. Perhaps frozen. By the time the 12-minute mark rolled around, the Tigers were still scoreless. The Falcons, a team still searching for its first conference win, led 9-0.

“It’s hard to play back-to-back (days),” said Albert Lea head coach Lindsey Hugstad-Vaa. “You could see it in our shots at the beginning. We had to adjust to try to get some layups.”

Hugstad-Vaa also said the experience of playing two games in two days can help the team prepare for the rigors of the postseason tournament.

A pair of free throws from Fran Eckstrom gave Albert Lea its first points of the evening, and the Tigers took their first lead four minutes before halftime when Bryn Woodside completed a three-point play.

Albert Lea finished the first half on a 16-2 run.

“We started setting screens and looking for the open girl,” Hugstad-Vaa said.

Good passing and aggressive defense helped the Tigers climb back into the game, Hugstad-Vaa said.

“Bryn was getting tips on the top, and Megan got a lot of steals, too,” she said. “Just getting our hands on the ball and looking to push — even though we were slow and tied — helped us get a few fast-break layups.”

Early in the second half, Albert Lea withstood a small run by Faribault and built its lead to double digits.

“Our rebounding led to a lot of passes up the court,” Woodside said. “That’s what we wanted to do.”

Woodside scored 11 points in the first half and finished with a game-high 16 points.

Megan Kortan had a double-double with 13 points and 12 rebounds.

“She (Megan) crashed the boards hard both offensively and defensively,” Hugstad-Vaa said. “I don’t think the girls stopped being aggressive even when we were struggling to score.”

Sydney Rehnelt made Albert Lea’s only 3-point basket. She scored 11 points and had six rebounds.

In the paint, Eckstrom and Caycee Gilbertson combined to score 12 points and grabbed 11 rebounds.

Albert Lea plays next at 7:30 p.m. Monday at Rochester John Marshall. The Rockets are second in the Big Nine Conference standings, and they squeaked out a 63-62 win at Albert Lea on Dec. 19. 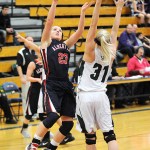 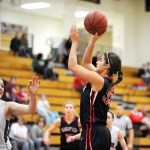 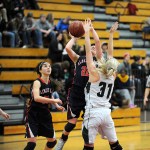 Bryn Woodside of Albert Lea looks to score as she drives to the basket Friday against Faribault. Woodside scored a game-high 16 points to go with three rebounds, six assists and three steals. — Micah Bader/Albert Lea Tribune