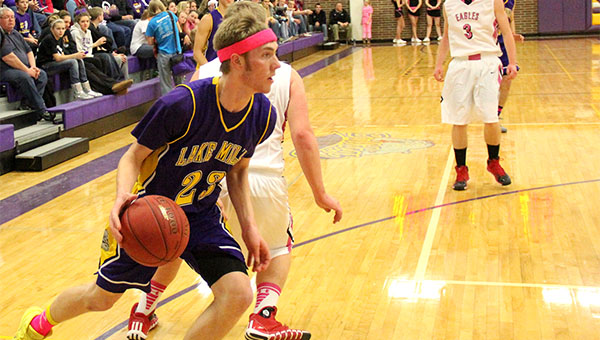 LAKE MILLS — The Lake Mills boys’ basketball team won by 10 on Friday night and have five players score in double figures. However, coach Kyle Menke pointed out there was room for improvement.

“I thought we had an excellent first half. We played very well and shared the ball,” he said. “I was real pleased with all parts of the game outside of the fourth quarter.” 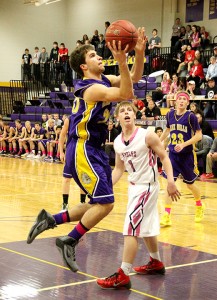 Menke’s team picked up an 82-72 win over West Hancock at home on Friday. The Bulldogs (11-3 overall, 7-3 North Iowa Conference) had a 49-33 lead at halftime, but West Hancock lingered around.

“We’re really happy to get the ‘W.’ I thought we did some really nice things,” Menke said. “I’m happy with the way we closed out the last minute or so when they had it down to a three-possession game.”

West Hancock amped up its aggressiveness and cut its deficit to a few possessions with five minutes left. Lake Mills was able to make its free throws and put the game on ice when West Hancock tried to extend the game by fouling.

“In the fourth quarter we got very nonchalant,” Menke said. “We took some very bad shots. We did the things that allowed them to get back into the game. But overall West Hancock has a very nice team, and they fought to the very end like we knew they would.”

Menke said the lapse in the fourth quarter could be attributed to all the practice days that the team had missed because of school being called off and dismissed early recently.

“We’ve had one practice in the last 16 days,” Menke said. “So the game nights have been interesting. As coaches, sometimes we don’t know what to expect, but I was very pleased with the way we worked to build the lead. The next step for us is to do a better job of closing it out.”

Josh Peters had 21 points and 10 rebounds, Mateo Peña had 15 points, Taylor Throne had 14 points and eight rebounds and both Hunter Kingland and Paul Pins had 10 points. Throne was a beast in the paint and recorded multiple blocks on defense, including two in a row at one point.

“Taylor Throne did some really nice things,” Menke said. “That was probably one of the best games he has played with his interior defense, which was great to see.”

Lake Mills collected cancer donations between the girls’ and boys’ game. More than $4,000 was raised. The girls’ team wore all pink jerseys and some of the boys wore pink socks and sweatbands.

“I was real proud,” Menke said. “My third-grade class raised almost $350 on its own. It is a fun night to see all the people coming together and raising money for a great cause.”