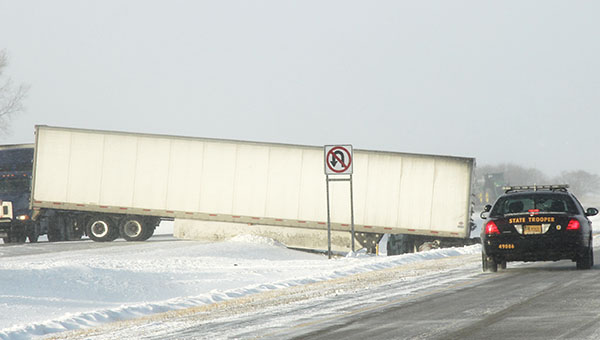 A jackknifed semi rests in the median of Interstate 35 about five miles south of Albert Lea.

The Minnesota Department of Transportation warned motorists to be extra careful while traveling, particularly on Interstate 35.

Several trucks and cars ended up in the ditches between the Iowa border and Owatonna. The roadway was like an ice rink in many places. Some spinouts occurred on Interstate 90.

MnDOT’s 511mn.org website listed I-35 and all the roads in the Albert Lea area as “difficult driving.” Several crashes were shown up and down I-35. 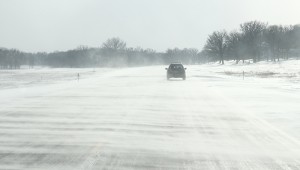 “Driving conditions are difficult with blowing snow and reduced visibility at times,” MnDOT stated in a news release.

“Because of conditions, icy patches can occur.

“Officials do not anticipate any interstate or highway closures at this time; however, motorists may encounter brief lane and road closures where crashes occur,” the release stated.

The Albert Lea area received anywhere from 3 to 3 1/2 inches of snow Thursday as yet another winter storm moved through. A northwest wind of 17 to 21 mph with gusts up to 28 sent snow blowing over roads.

At times like that, routes with more traffic can be more dangerous because exhaust from slow-moving vehicles can form black ice. On I-35, it was apparent that the right lane was icier than the left in most places.

The National Weather Service predicts a high of 8 degrees for Albert Lea today, with mostly sunny skies and a calm wind. There is a 40 percent chance of snow forecast for Saturday, with a 10 to 15 mph northwest wind and gusts up to 25.