I’ve just received a package from a new friend in Illinois, Jim Westberg. Jim grew up with his family in Albert Lea. He has shared with the Albert Lea Tribune some treasured family history from 1945. 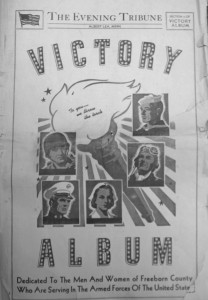 Frankilin D. Roosevelt was president. The first actual case of a computer bug was found (a moth lodged in a relay of a Harvard Mark 2). World Ward II came to an end for most. And history was preserved on the pages of The Evening Tribune.

Jim shared two full copies of special editions printed by the Tribune. One being the History of World II, published on Oct. 20, 1945. The other being Section 2 of a Victory Album, honoring the men and women of Freeborn County who were serving in the Armed Forces of the United States.

Jim also shared some individual clippings about his father, Lt. Franklin A. Westberg, who was decorated for gallantry in action overseas when he received the Soldier’s Medal.

The clipped article states that Lt. Westberg was awarded the coveted Soldier’s Medal for a saga of personal heroism and sacrifice on April 11, 1944. His citation accompanying the award read as follows:

“For gallantry in action against the enemy on April 11, 1944. While over Germany and prior to reaching the objective, the B-17 in which Lt. Westberg was co-pilot was subjected to a concentrated attack by a large number of fighters, 20mm cannon shells ripped through the plane, riddling it from nose to tail. One shell exploded in the cockpit, seriously wounding Westberg and the pilot, and rendering most instruments useless.”

“After the pilot and co-pilot had brought the plane out of the spin to level flight, the pilot ordered the plane abandoned when informed that the loaded bomb-bay was afire. Seven members of the crew bailed out. With Lt. Westberg at the controls, the pilot, while aiding wounded crewmen to bail out discovered the bombardier had been rendered useless by enemy bullets. Lt. Westberg elected to remain with the pilot who was trying to save the bombardier.”

“While still over enemy territory, the pilot lost consciousness. Exhibiting courage and superior airmenship against seemingly insuperable odds. Lt. Westberg flew the aircraft back to England and was circling an emergency landing field when the pilot revived. With the pilot and co-pilot coordinating perfectly, a safe landing was made despite the battered condition of the aircraft. Only then did Lt. Westberg submit to the treatment of his wounds.” 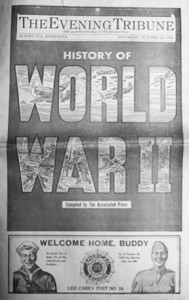 These publications demonstrate the emotional appeal that we the people had toward America in 1945, and, most importantly, they demonstrate an awesome level of bravery from our friends and family right here in Albert Lea.

Thanks for sharing, Jim. Your father was an amazing man.