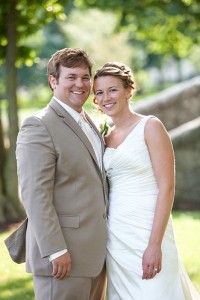 The bride is the daughter of Peter and Karen Rubsam of Appleton, Wis. Grandparents are Phyllis Hass and the late Lester Winkler and the late Tony and Agnes Rubsam, all of Appleton.

Maid of honor was Macy Paul, sister of the groom, of La Crosse, Wis.

The bride is a graduate of the University of Wisconsin-La Crosse with a bachelor of science degree in education. She is employed with Scottsbluff Public Schools.

The groom is a graduate of the University of Wisconsin-La Crosse with a Bachelor of Science degree in nuclear medicine. He is employed at Computerized Medical Imaging.

A reception was held at Bridgewood Resort in Neenah, Wis.