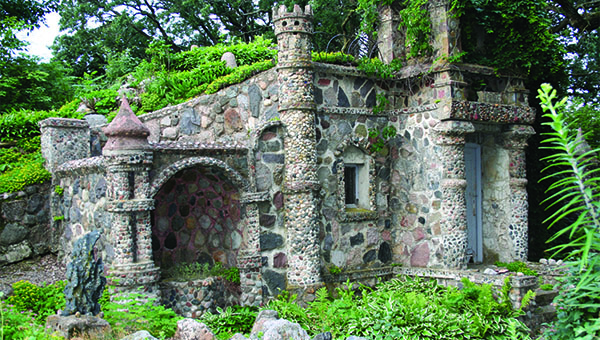 Editor’s note: This is the first of a series featuring some of Ed Shannon’s best Lifestyles features. The following article was published Aug. 28, 2008.

In 1925, John L. Christensen set out to construct a small castle-like building to store beehives.

What began as a small project grew and grew until Christensen gathered more rocks and concrete to make other structures and a rock garden was formed. The garden setting even had fish ponds.

Born in Denmark in 1875, Christensen came to Freeborn County when he was 9 years old. He lived and farmed in the Riceland Township until his retirement.

The Danish-born handyman worked to expand and improve on his rock garden until his death in April 1939.

His widow married George Colbertson in 1940, and they maintained the Itasca Rock Garden for 10 years. It passed through more hands until Joe Spark Jr. bought the property in 1985.

Spark welcomes anyone to the garden as long as they “behave and show courtesy and respect.”

A historic marker for the pioneer village of Itasca is next to the roadway and near the driveway entry to the garden area.