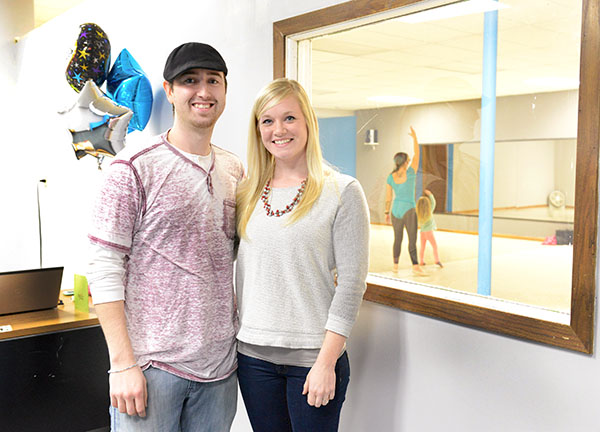 Dustin Boyer and Jessica Johnson opened Echo Step, a dance studio, on Feb. 3 at 1416 W. Main St. The building is about 2,000 square feet and includes an office space, changing room and a bathroom. From the office parents are able to watch their child’s class through a window. — Brandi Hagen/Albert Lea Tribune

The doors opened last Monday to an Albert Lea couple’s dream after months of planning.

Owners of Echo Step, Jessica Johnson and Dustin Boyer of Albert Lea, a couple engaged to be married in August, hope to offer variety with quality in their dance studio at 1416 W. Main St.

The name of the studio is credited in part to Johnson’s 8-year-old son, Dagen.

“We were sitting in the car on the ride home from school throwing out a bunch of names,” Boyer said. 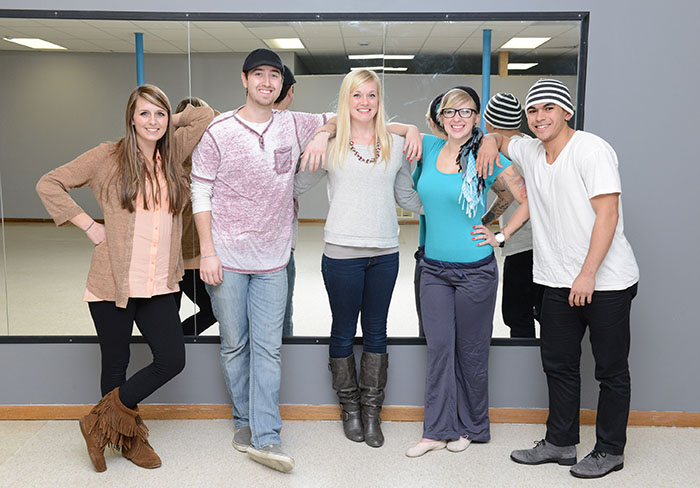 After the discussion in the car and a discussion with Johnson at home, the name was decided.

That doesn’t mean that Johnson and Boyer are teaching every single class, though. Because they have jobs outside of the studio, Johnson as a dog groomer at Richway Poochie Parlour, and Boyer as a youth director at Grace Lutheran Church, and they will be teaching a hip-hop class, they have found other instructors in the community to come teach, too.

Johnson and Boyer got in touch with others like Holly Page, Trisha Wayne, Kevin Sarmiento, Amber McCornack and Sherry Jensen after getting referrals or hearing about them through the grapevine.

“I feel like we’re giving people an opportunity to do what I want to do,” Boyer said. “We all have our jobs outside of this. People can still have their passion, and that makes me feel really good because a lot of times because of a job or because of a career your passion dies.”

The couple already has a list of dances they will be adding to the studio, too. So far those classes are ballroom, salsa and belly dancing.

“I had a lady call and ask about Irish dancing,” Boyer said. “I told her, ‘We don’t, but we’re probably going to figure out what it is and how to do it.’ I want to try and offer whatever is out there.”

The classes are organized by age and range from 3-years-old to adult. No experience is required.

“…You can take our class,” Johnson said.

Because Johnson and Boyer want to fill what they feel is a void in the area and let people explore the many opportunities available, they have decided to offer a few discounts to dancers.

There is a discount for out-of-town dancers, families with more than one participant and for dancers taking more than one class in the studio.

“If you’re going to invest your kid into this studio and have them in all those classes, we feel that we should make it affordable for you,” Boyer said.

Johnson and Boyer know first-hand how important it is to be affordable for families. Dagen and Johnson’s 4-year-old daughter, Lili, are signed up for several classes at the studio.

The couple’s idea to have their own studio space started forming in September.

After looking into different places to call their own and figuring out what could and couldn’t work, they landed on the 2,000 square foot space they now call Echo Step.

“The beauty of not needing to rush put me in a place where I could find this,” Boyer said.

Inside the building is a studio space large enough for about 30 dancers, an office with a window where parents can watch classes through, bathrooms and what will be a changing room after some renovations.

Johnson said opening the dance studio and planning for their wedding has had the couple on quite an adventure, but they will work well together as business partners because they know how to be professional.

“We make such a good team because we’re honest with each other,” Boyer added. “Jess allows me to not be stagnant. And, I can be honest with her.”

Echo Step can be found on Facebook and online at www.echostep.co.