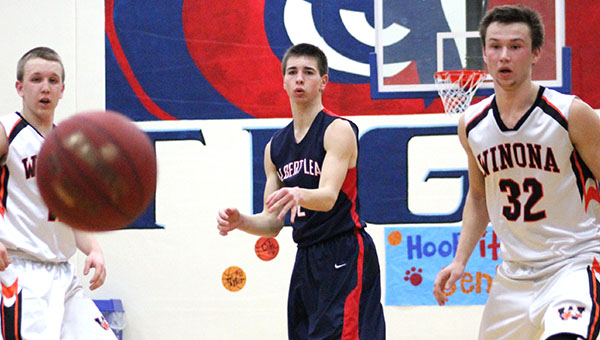 The Tigers boys’ basketball team fell to Winona on Tuesday, but despite the defeat, the team was able to honor its seniors and former Albert Lea head coach Orrie Jirele.

Albert Lea fell 58-50 to Winona on Senior Night. The Tigers’ nine seniors used the night to honor the memory of Jirele. Seniors Cody Scherff, Cole Keyeski, Tyler Vandenheuvel and Tesloch Kuey shared some thoughts on Jirele in an insert in the game program.

“Orrie took the opportunities of life and grasped onto them,” Keyeski said in the program. “Orrie was a great role model and he has had a lasting impact on me and many others who were fortunate enough to have met him. He made you feel important, and that was what made him so special.”

The seniors gave one of Jirele’s sons a signed basketball at halftime, and former Albert Lea football coach Max Jeffrey read a statement about Jirele’s life to the crowd. Tigers’ head coach Lucas Kreuscher said he only knew Jirele for a short time but had nothing but kind words to describe the former coach.

“He’s meant a lot to the basketball program, and obviously he’s meant a lot to the community and to the school,” Kreuscher said. “He was a guy who was passionate in whatever he did, and everybody knew that. He was a great individual, and it was a nice way to honor him. I was glad the seniors wanted to share the night with him.”

The whole team wore camouflage socks to honor Jirele, and some fans also sported camo in the stands.

Albert Lea and Winona were tied 22-22 at half. The Tigers led throughout much of the first half, but Winona tied things up on a last-second 3-pointer. Winona pulled away with about eight minutes left in the second half, extending its lead to eight points with five minutes left in the contest. Albert Lea cut into its deficit and extended the game with fouls, but Winona nailed most of its free throws down the stretch.

“There’s not a lot of margin of error for us right now,” Kreuscher said. “There’s really not much gap between teams. It’s a bunch of little things that are adding up to be big things, and we have to continue to improve on some of them.”

The Tigers will wrap up the regular season at 7:30 p.m. Friday at Mankato East.