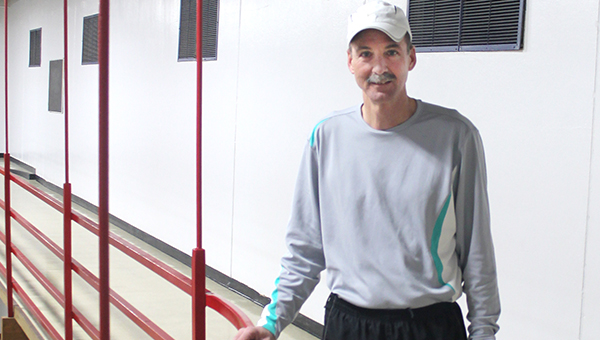 Dennis Dieser, executive director of the Albert Lea Family Y, stands on the indoor track at the Family Y where he trained for the Rock ‘n’ Roll Marathon where he qualified for the Boston Marathon.
–Micah Bader/Albert Lea Tribune

With 2 minutes and 54 seconds to spare, Dennis Dieser met his goal.

He qualified for the Boston Marathon by completing the Rock ’n’ Roll Marathon in Phoenix, Ariz., in 3 hours, 27 minutes and 6 seconds on Jan. 19. 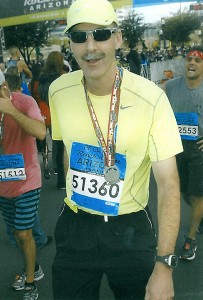 Dennis Dieser wears a medal after completing the Rock ‘n’ Roll Marathon in Phoenix, Ariz. He finished in 3 hours, 27 minutes and 6 seconds to qualify for the Boston Marathon. — Submitted

When Dennis hit mile 24 of the 26.2-mile race, he knew he was in good shape from looking at his GPS watch that tracks his pace and distance.

Qualifying for the oldest annual marathon in the world is a feat in itself, but Dieser, 52, did so while wearing an insulin pump. He’s a Type 1 diabetic.

“That’s half the battle for me,” Dennis said. “I train and can do everything right, but on race day if I can’t keep everything in balance, there’s nothing I can do.”

Even with 12 marathons under his belt, Dennis’ wife, Doreen, remains cautious.

“My mom, she’s a worrier,” said Kellsie, Dennis’ daughter. “She always gets scared, but he’s done it so many times. He’s really smart about it, and he has it under control.”

On race day, Dennis has a routine.

“I eat a little extra in the morning, and then I cut my insulin way back,” he said. “That allows me not to worry.”

At the Rock ‘n’ Roll Marathon, it was a team effort. Doreen and Kellsie, along with Dennis’ son-in-law and daughter-in-law provided apple juice at mile marker seven, 14 and 21. 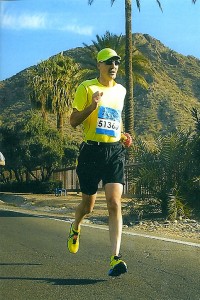 Dennis Dieser of Albert Lea runs in the Rock ‘n’ Roll Marathon in Phoenix, Ariz. on Jan. 19. He finished in 3 hours, 27 minutes and 6 seconds to qualify for the Boston Marathon. — Submitted

“They’re my No. 1 helpers,” Dennis said. “The apple juice works for me. Otherwise, I’ll take water at the water stops, but I don’t like gatorade.”

To train for the race, Dennis said he runs distances that vary from eight miles to 22 miles five days a week. To stay on track, he keeps a log, and two weeks before a marathon, he rests.

“You can back off a lot, which is kind of fun,” he said. “Then you’re ready for race day, and you have a lot more energy.”

Dennis trained on the inside track from October of 2013 to January of 2014 of at the Albert Lea Family Y, where he is an executive director. He said he prefers to run outside, but the cold weather forced him indoors.

“It was helpful for focus,” he said. “I don’t use headphones, so I was just counting laps.”

“He’s always loved running, so to share that with him was really fun. Maybe I won some brownie points, too,” Kellsie said with a laugh. “It was good to have someone to hold me accountable.”

The Falls Marathon was Dennis’ 10th and Kellsie’s first.

Kellsie is a 2010 graduate of Albert Lea High School and a senior at the University of South Dakota in Vermillion, S.D.

She said she hasn’t planned another marathon with her father, but she’s open to the idea.

“I hope we can run another one in the future,” she said.

Dennis, a graduate of Rochester Mayo High School and Minnesota State-Mankato University, said he didn’t start running until a few friends — Steve Merfeld, Greg Wilson and Jennifer St. Amand — talked him into it in 1987.

“It’s a good stress release,” he said. “Plus, I can get outside where no one can find me. It’s good sometimes to just get away.”

Dennis said his motto for the way he lives his life is a quote from Gale Sayers, a running back who played seven seasons for the Chicago Bears.

“God is first, family and friends are second and I am third,” he said. “I like that.”