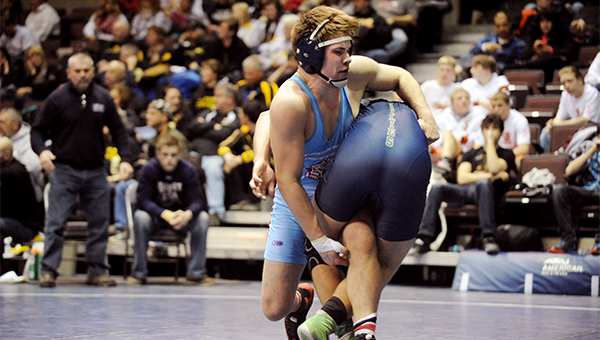 After Day 1 of the Section 1AA wrestling tournament on Friday, eight Albert Lea matmen qualified for the semifinals and two more are still alive in wrestlebacks.

“I felt all the kids wrestled well today,” said Albert Lea head coach Larry Goodnature. “We wrestled to our seeds, and there weren’t any letdowns. That was good to see.” 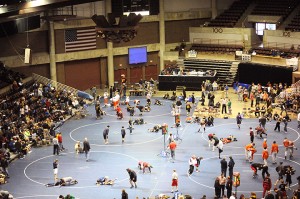 Wrestlers warm up on the mats Friday at the Section 1AA quarterfinals at the Mayo Civic Center in Rochester. — Micah Bader/Albert Lea Tribune

The Tigers’ three No. 1 seeds — Garrett Aldrich at 106 pounds, Devin Nelson at 138 and Triston Westerlund at 195 — each received a first-round bye and didn’t hit any early roadblocks en route to the semifinals.

Westerlund, ranked No. 3 in The Guillotine’s polls, made quick work of his only opponent, Chase McCormick of Caledonia, with a fall in 39 seconds.

Aldrich, a freshman ranked No. 6, pinned Logan Sass of La Crescent in 3 minutes and 32 seconds.

“It’s fun,” Aldrich said of his first varsity postseason experience. “I can’t wait to hopefully get a trip to the state tournament.”

A rematch between Aldrich and Kasson-Mantorville’s Keaton Schorr is brewing. Aldrich beat Shorr with a 7-4 decision in the Section 1AA team semifinals. So far in the individual tournament, Shorr pinned Peter Fitterer of Cannon Falls in the first round, and he qualified for the semifinals with a 12-8 decision over Reed DeFrang of Plainview-Elgin-Millville in the quarterfinals.

Nelson, ranked No. 7 at 138 pounds, moved onto the semifinals by beating John Wilson of La Crescent with a 14-2 major decision.

Johnsrud, one of three wrestlers in the section ranked in the top 6 of Class AA at 120 pounds, pinned Tyler Lourdes of Stewartville in 37 seconds and beat Beau Milbrett of Waseca 10-4 in the quarterfinals.

Skyler Petry of Waterville-Elysian-Morristown, ranked No. 1, and Ryan Epps of Cannon Falls, ranked No. 4, also reached the semifinals at 120 pounds. Johnsrud will face Epps, and Petry will face Jacob Winjum of Caledonia in the semifinals. When Albert Lea took on Waterville-Elysian-Morristown in a dual during the regular-season, Johnsrud wrestled at 126 pounds, and Petry wrestled at 120.

At 145 pounds, Acosta pinned his only opponent of the day, Zach Holes of Cannon Falls, in 1 minute and 34 seconds. He will face Ryan Kottschade of Plainview-Elgin-Millville in the semifinals. 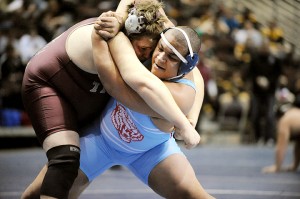 Will Mendez of Albert Lea takes down Kyle Lipke of Stewartville in the Section 1AA quarterfinals Friday at the Mayo Civic Center in Rochester. Mendez pinned Lipke in 3 minutes and 55 seconds. — Micah Bader/Albert Lea Tribune

After Samudio’s first-round bye at 152 pounds, he beat Caledonia’s Blaine Knutson by fall in 3 minutes and 2 seconds. Samudio will face Brenton Ring of Plainview-Elgin-Millville in the semifinals. The 152-pound weight class is the only bracket without a wrestler in the state polls.

Christianson advanced by pinning Mitch Wolter of Waterville-Elysian-Morristown/Janesville-Waldorf-Pemberton in 4 minutes and 40 seconds in the quarterfinals. The Tigers and Buccaneers met during a regular season dual, and Christianson pinned Travis Miska in 1 minute and 2 seconds.

“My goal is to win it all,” Christianson said.

Christianson, Westerlund and Johnsrud are the only Tigers with postseason experience.

“Like I’ve said from the beginning, we’re a young team and an inexperienced team,” Goodnature said. “But I feel really good about the spot we’re in now, going into the second day of the tournament.”

After transferring from Lake Mills as a junior, Will Mendez was unable to wrestle varsity matches due to a league rule. This season, Mendez has a 21-13 record as a senior, and he advanced to the heavyweight semifinals by pinning Kyle Lipke of Stewartville in 1 minute and 25 seconds. He said his first postseason action was exciting. Mendez will face undefeated, No. 1-ranked Sam Stoll of Kasson-Mantorville in the semifinals.

Albert Lea’s Gavin Ignaszewski and Bryce Hoyt had the most active Day 1 of the tournament.

After advancing to the quarterfinals with a bye, Ignaszewski was pinned by Chase DeFrang of Plainview-Elgin-Millville, the No. 10 wrestler in the polls, in 1 minute and 8 seconds. However, he bounced back in wrestlebacks by pinning Wyatt Storch of Waterville-Elysian-Morristown in 27 seconds and beating Lucas Hagel of Waseca with a 6-1 decision to reach the consolation semifinals and stay in the battle for true second.

Hoyt won his first-round match with a 15-0 technical fall in 3 minutes and 26 seconds over Nathaniel Douglas of Byron. He lost his quarterfinal match with a 15-2 major decision to slide into wrestlebacks, where he went 2-0. He beat Sam Ebin of Plainview-Elgin-Millville 8-2 and Reid Ayers of Waterville-Elysian-Morristown 9-5 to reach the consolation semifinals.

Goodnature said the talent is widespread in the section.

“This section we’re in is a very deep,” he said. “There’s a lot of good kids in every weight class, and I feel we’re wrestling really tough.”

Read about the semifinals and finals — including the individual state qualifiers — in Monday’s edition of the Tribune. Sunday’s Tribune was sent to the press before Day 2 of the tournament.