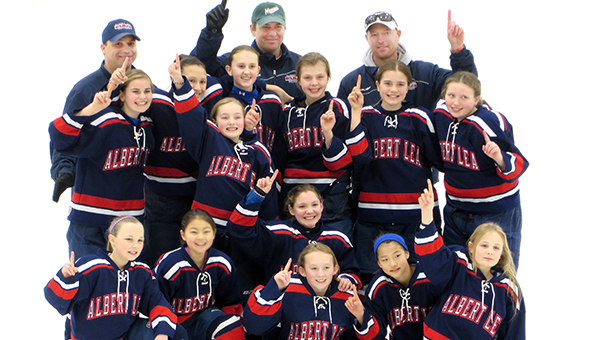 The Albert Lea U10 girls’ hockey team took first place Sunday at the three-day Eden Prairie Meltdown tournament, according to a press release.

In the championship game on Sunday, Albert Lea faced off against Burnsville. Albert Lea got off to a fast start as Rasmussen scored an unassisted goal 50 seconds into the game. Rasmussen scored again four minutes into the second period on a goal assisted by Allison Dulitz. Hernandez added a goal with one second left in the second period. Hernandez was assisted by Sadie Neist and Lucy Sherman. Rasmussen completed her second straight hat trick with a goal in the third, and Hernandez added another to round out the scoring. Maddie Schneider stopped 17 shots to record the shutout in goal. Albert Lea showed great effort and outstanding teamwork throughout the tournament.

Albert Lea is coached by Dan Rasmussen, Troy Neist and Brad Fjelsta. The team finished the 2013-14 season with an overall record of 25-1.