An Albert Lea woman pleaded not guilty in Freeborn County District Court on Thursday to stabbing a man with a fillet knife.

Applegate faces one count of second-degree assault with a dangerous weapon tied to the alleged stabbing Jan. 17 at 802 18th St.

Her trial date has not yet been set. 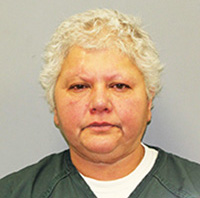 Court documents state when officers arrived at the house, the man answered the door with the knife still in his upper chest. About three inches of the blade was exposed.

The man told police Applegate had allegedly stabbed him in an argument about vodka, according to reports. His T-shirt was soaked in blood, and he was taken to the emergency room at Mayo Clinic Health System in Albert Lea. His injuries were not life-threatening.

Second-degree assault carries a maximum penalty of seven years in prison and a $14,000 fine.