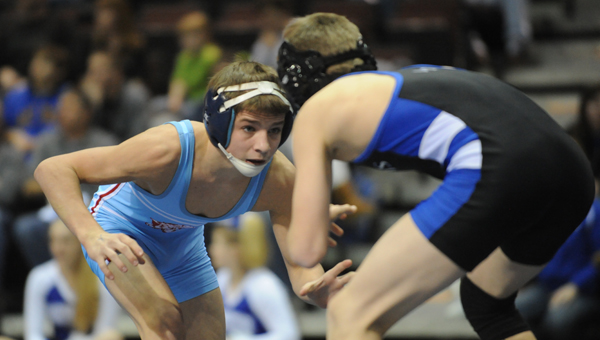 The Albert Lea wrestling team’s dual season ended one win away from the state tournament.

The Tigers, ranked No. 8 in the Class AA polls, followed a 44-19 win over Plainview-Elgin-Millville in the Section 1AA semifinals with a 39-18 loss to No. 5 Kasson-Mantorville Saturday at the Mayo Civic Center in Rochester. 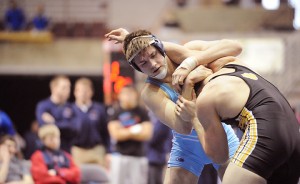 Nick Kromminga of Albert Lea wrestles Brady Schultz of Plainview-Elysian-Morristown. Schultz won with an 8-1 decision, but the Tigers beat the Bulldogs to set up a match with Kasson-Mantorville in the finals. — Micah Bader/Albert Lea Tribune

Albert Lea finished with an 18-9 overall dual meet record and an 8-1 mark in the Big Nine Conference.

In the semifinals, the Tigers cruised to victory after winning five of the first six matches to build a 23-6 lead.

Garrett Aldrich, ranked No. 6 in The Guillotine’s Class AA poll, won by fall at 106 pounds, and Bryce Hoyt won with a 19-4 technical fall to start Albert Lea on the right track. Plainview-Elgin-Millville’s 10th-ranked Chase DeFrang, pinned Gavin Ignaszewski at 120 pounds, but Albert Lea rebounded with decisions by sixth-ranked Beau Johnsrud at 126 and Mason Hammer at 132. No. 7 Devin Nelson gave the Tigers breathing room at 138 by pinning Caleb Getschmann in 3 minutes and 7 seconds.

Albert Lea went on to win five of the last seven matches with falls by Bany Chan at 160 pounds and No. 3 Triston Westerlund at 220. Derek Samudio, Tim Christianson and Will Mendez won with decisions to propel the Tigers to the finals.

Against Kasson-Mantorville in the finals, Albert Lea jumped out to an 18-6 lead but was unable to win a match after 138 pounds.

Aldrich gave the Tigers momentum early by upsetting Keaton Shorr, the No. 5 wrestler in the polls, with a 7-4 decision. Kasson-Mantorville tied the match with a decision at 113 pounds, but Bryce Hoyt won a 5-3 decision at 120 pounds and Johnsrud pinned Brady Laumb at 126 pounds in 1 minute and 26 seconds. Nelson pinned Kasson-Mantorville’s Jim Paulson in 39 seconds at 138 pounds to give Albert Lea a 12-point lead. 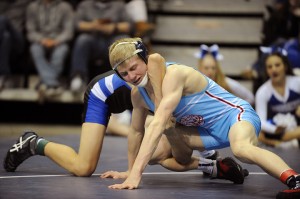 However, Kasson-Mantorville won the next eight matches with three falls and five decisions.

“There were five toss-ups, and we lost all of them,” Goodnature said. “Kasson’s a good team. They’re a little more balanced than we are, but it was a good battle.”

In those last eight matches, three wrestlers were ranked for the KoMets.

No. 6 Andy Bigelow of Kasson-Mantorville defeated Nick Kromminga 9-3 at 182 pounds and the KoMets won the heavyweight match in 35 seconds when No. 1 Sam Stoll pinned Will Mendez.

Westerlund, who returned from an injury late in the season, did not compete against the KoMets.

“The match was already decided, and there was no sense in him wrestling and getting hurt for individuals,” Goodnature said.

The Tigers have another chance to compete for the state tournament on an individual level at a time that has not been determined Friday at the Section 1AA tournament at the Mayo Civic Center in Rochester.

“That’s the neat thing about the sport of wrestling for us,” Goodnature said. “The team season’s over, but now each of these kids individually has a chance to get up to the Xcel (Center) at the state tournament.”