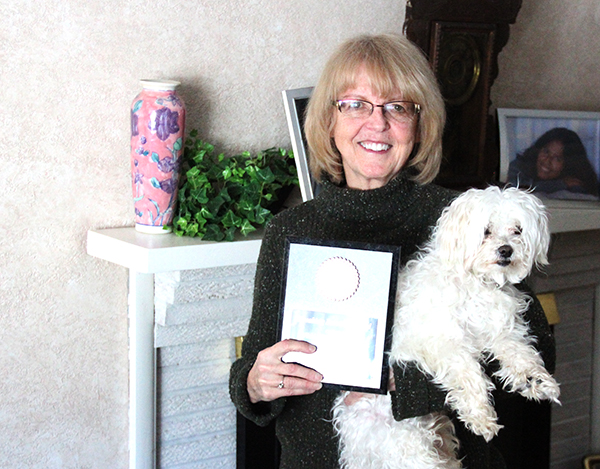 Vikki Pence broke down barriers during her career as a coach at Alden-Conger High School. She was formally recognized earlier this month.

Pence was awarded one of the 2014 Breaking Barriers Awards during a presentation at the National Girls and Women in Sports Day at the Minnesota State Capitol on Feb. 5. She was one of 11 recipients. The award is presented annually to people or organizations having made an impact in providing athletic opportunities for girls and women in their community.

“I was given this letter that said I won,” Pence said. “It’s a wonderful thing and it was so far beyond what I thought it was going to be. It was so inspirational and wonderful. It was so much fun because you don’t talk about pioneers anymore, we just take everything for granted.

Pence coached 37 seasons, split between basketball, volleyball and softball, at Alden-Conger. She started at the school before Title IX was passed in 1972, which meant that she was around for the beginning of high school girls’ sports.

She said she has no idea what her record was as a coach, because that wasn’t really important.

Pence was born in Crookston and graduated from Crookston Central High School in 1966. After high school she went to Moorhead State University for four years. Her first job was in Alden in 1970, then she got her coaching degree and adapted physical education degree from Mankato State University.

When Pence started at Alden she was a cheerleading adviser, because that’s the only activity that women could coach. Next she started the Girls Athletic Association.

“We would just meet and do things, we even had slumber parties,” she said. “That’s all I had in high school, too. When I went to high school there were no girls’ sports. I played softball in the summer, so softball was my thing.”

After the passage of Title IX, Pence still had a lot of hurdles to jump over to getting Alden-Conger’s girls’ sports on track.

“The school board felt that money could be better used in other things than a girls’ program,” Pence said. “They didn’t want us taking to the boys’ practice time.”

The first sport she coached was basketball, which was originally called extramural before it was interscholastic. While the team had the extramural status, it was only allowed to play three games.

Basketball was the first sport; it started in the fall so it wouldn’t disrupt the boys’ program. They started with rubber balls and pennies as uniforms. Volleyball eventually was the fall sport when basketball moved to winter. Alden-Conger started off with a track and field team in the spring that was eventually replaced by a softball team.

Because of the small school, Pence said the same group of girls were on each team.

“We had a great group, and they were successful,” she said. “Back then they went out for everything. It’s not like now where they specialize, you played everything. Along with being in the band and the choir, you were in everything.”

Pence became interested in sports and physical education in high school, thanks to her teachers.

“I would have to say they encouraged me into phy-ed,” she said. “I was pretty good. Back then you were called a ‘tomboy’ if you were good at sports. We don’t use that term anymore, that would be old-fashioned; now they’re athletes.”

“I was pretty good,” she reiterated. “I could run fast, I could beat the boys and I played a mean game of softball. I just wanted to do that, and play is fun. Teaching phy ed is great because most people like it. Usually you can always find something that everybody will like.”