A memorial service for Allen J. View will be at 11:30 a.m. Saturday at the Bonnerup Funeral Chapel, Albert Lea location. The Rev. Curtis Zieske will officiate. Visitation will be one hour prior to the service at the funeral home. 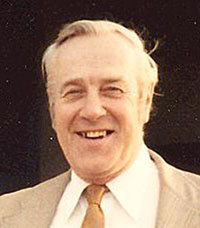 Allen J. View was born on Nov. 9, 1926, to Jesse and Anna (Olson) View in Milroy. He was raised on a farm and attended a one room country school through eighth grade. Allen then graduated from Tracy High School in 1944. Allen had a long and interesting career starting with three years in the Military Police Platoon, 1st Calvary Division, the Army of Occupation, Japan. After his honorable discharge he came back to operate the family farm for more than 14 years and later became a Schwan’s salesman for more than six years. Allen then served as a police officer for the city of Marshall, followed by two years of service as the assistant chief of police for the city of Hutchinson.

Allen was an accomplished businessman. In July of 1972 he purchased two businesses in Albert Lea, the Kozy Rest Motel and the Mobile Bulk Plant. He later owned and operated two more mobile stations, Interstate on I-90 and North Side Mobile. Al truly enjoyed working with the public.

On Sept. 8, 1979, he was united in marriage to Linda Freeman at the United Methodist Church in Albert Lea. Their journey continued in 1980 when they moved to Richfield, where they owned and operated another gas station. In 1981 they relocated to Randall, where they managed the Conoco Truck Stop and Insbrook Motel. They returned to Albert Lea in 1983 to continue to operate the Kozy Rest before moving to Wells in 1985.

While residing in Wells, Allen worked in security and hotel management and then later enjoyed his job delivering motor homes. He also worked at Swift Eckridge, Birdseye and DelMonte. He fully retired in 1997 and the couple eventually relocated to Albert Lea in 2008.