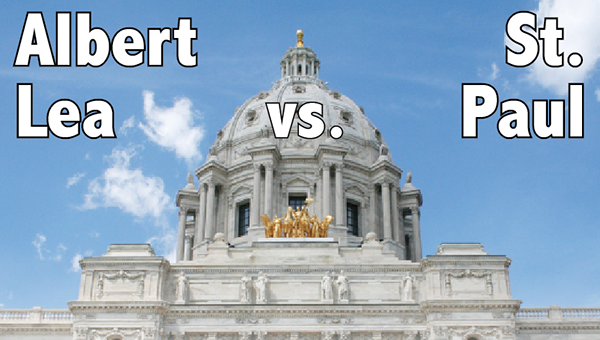 The Minnesota State Capitol in St. Paul is where many issues facing Albert Lea will get debated and resolved in coming weeks. The city must compete with requests from around the state for bonding money.

With 2014 labeled as a bonding year, the largest responsibility for the Minnesota Legislature this session will be to agree on a capital investment bill.

What are Albert Lea officials and state lawmakers doing to make sure area projects are included?

District 27A Rep. Shannon Savick, DFL-Wells, said she and District 27 Sen. Dan Sparks, DFL-Austin, met with local leaders on Friday to talk about strategies for obtaining $7.5 million out of a $15 million project to dredge Fountain Lake.

“It’s our top priority for the district,” Sparks said.

The senator, who is part of the Senate Capital Investment Committee, said going after bonding funds is about building relationships. Both the Senate and House bonding committees came to Albert Lea to meet with local leaders and learn about the project, which was a good step.

The project is necessary because the lake has become filled with sediment — as much as five to eight feet in some areas. The accumulation has resulted in water quality impairment and large algae blooms.

Savick said she is friends with Alice Hausman, chairwoman of the House Capital Investment Committee, and she has talked to her personally about the importance of the project. She has also talked to the DFL leadership in the House.

“My message to them is Albert Lea has done everything the state has asked them to do,” Savick said. “They’ve cleaned up the water that’s coming into the lakes. They’ve fixed some dams. And they’ve done a half percent sales tax hike to do that. They’ve done some terrific planning, and I think in doing all of those things the state has asked them to do that there should be a commitment from the state.”

Likewise, being in a swing district, she said she told the DFL leadership that it could possibly hurt her re-election if the project is not included in the bill.

The Senate needs a majority vote to approve the bill, while the House needs a two-thirds vote. Savick said Hausman and the House committee will make sure to have some Republican bills in to get the needed Republican votes.

On top of the work Sparks and Savick said they are doing, local leaders will be lobbying for the project, and several groups are writing letters to legislators about the project.

“I think they have a very well put together plan,” Savick said.

Sparks said the Senate Capital Investment Committee — will tour the remaining project up for consideration from Feb. 18 to 21 in the suburban and metro areas. The House and Senate bonding bills will be released sometime after the session starts Feb. 25.

Both Savick and Sparks said though the dredging project did not make Gov. Mark Dayton’s $986 million bonding proposal, the community should not be worried.

“That doesn’t mean his list is the final list,” Savick added. “There has to be compromise between what the Senate and House want.”

The lawmakers will also be pushing for $500,000 for the Blazing Star Trail and money for asbestos removal at Riverland Community College.

The discussion about raising the minimum wage started in 2013, but the House and Senate could not reach a compromise about how much the wage should increase.

The issue will come before the Legislature again this session, and Sparks said a conference committee will meet to begin working on the issue.

“There probably is going to be an increase  in the minimum wage, it’s just going to be where that dollar is set,” he said.

Savick said when she was younger she worked for her mother’s cafe at a time when there was an increase in minimum wage. The increase may have hurt her mother’s business for about the first month after it went into effect, but after that, her mother started getting more business because people had more money to spend.

“My own personal opinion is it will increase our economy,” Savick said.

Ryan Nolander, executive director of the Albert Lea Economic Development Agency, said he is looking to the session for statewide business tax reforms and more funding for infrastructure, broadband and businesses looking to expand.

Nolander said in March he plans on going to the Capitol on a day for officials from Greater Minnesota cities.

He would like legislators to look at what things Minnesota can do to be more competitive with neighboring states such as Iowa.

“Let’s analyze them and let’s create plans or programs that are similar to that,” Nolander said.

He said he is pleased with the new Minnesota Job Creation fund that rolled out in January that gives businesses money for creating new jobs and investing in their companies.

He said the largest challenge the area is facing presently is a workforce shortage.

Many times there are job opportunities, but businesses are not able to find the candidates to fill the position.

“Anything on the state level that can help with that,” he said.

He noted the challenge is more of a problem for Greater Minnesota than all of the state.

Sparks said he received the Albert Lea-Freeborn County Chamber of Commerce’s list of legislative priorities and will work to make sure the area has the economic development tools it needs.

Savick said the House is putting together a bill about the financial security of women, which is expected to include everything from getting equal pay for equal work to being able to get time off for sick children. It also talks about financial security for older women.

Savick said she will continue working to get a tax credit for volunteer first responders, emergency technicians and firefighters that can be used as an incentive for recruiting people to volunteer.

She said a coalition of representatives from Greater Minnesota met to discuss issues they could work on together, such as increased funding for roads and trying to get a more even split of the investments for the state.

In addition, Sparks said several of the committees he is on will be looking at taking old, irrelevant laws off the books.

“The bonding bill is going to be our No. 1 priority and getting projects of statewide significance in there,” he said.