Funeral services for Charlotte Grace (Brown) Sevaldson of Albert Lea, will be at 10 a.m. Saturday at the United Methodist Church of Albert Lea. The Rev. Tom Biatek will officiate. Visitation will be from 5 to 7 p.m. Friday at the Bonnerup Funeral Service and one hour prior to the service at the church. Interment will be in Graceland Cemetery, Albert Lea. 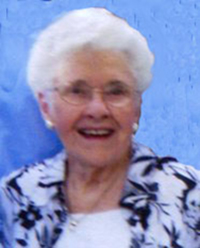 Charlotte was born Jan. 18, 1919, in Albert Lea, the daughter of Jefferson Newton Brown and Emma G. (Bremer) Brown. Jefferson Brown was a well-known auctioneer in this area. Her only brother, L. Warren Brown, was born in 1921 and died in 2011.Charlotte attended Ramsey Elementary School, graduating from Albert Lea High School in the class of 1937. That fall she enrolled at Hamilton Business School in Mason City, leaving there in June of 1938. On Aug. 15, 1938, she started working at the Trades Publishing Co. in Albert Lea, working for Mr. E.L. Hayek, and Mr. H. Carroll Day. She worked for Trades until she was married to Stan Sevaldson on Feb. 12, 1944, at the First Methodist Church in Albert Lea.

After their marriage, Charlotte accompanied Stan to the various bases he was sent to as a first lieutenant in the Army Air Corps. Stan was released from the Air Corps (after World War II ended) in September 1945.

They returned to Albert Lea at that time. Stan started working at the post office in November of that year and Charlotte returned to Trades Publishing. She worked there until September 1948.

Through the years, Charlotte was active in the PTA, being president of the Ramsey PTA and president of the Albert Lea PTA Council. She was a member of Beta Sigma Phi Sorority for over 50 years. She had been active in the United Methodist Church, holding different offices in the church and the United Methodist Women. She was a member of the Naeve Hospital Auxiliary, Vision-Hearing program, Meals on the Go and membership secretary for Civic Music Association for 17 years.

She is survived by her sons Brad and his life partner, Greg, of Boynton Beach, Fla., Dwight and his wife, Kathy, of Prior Lake, and grandson Jeff and his wife, Jenny, of Minneapolis.

She was preceded in death by her parents, husband and brother.