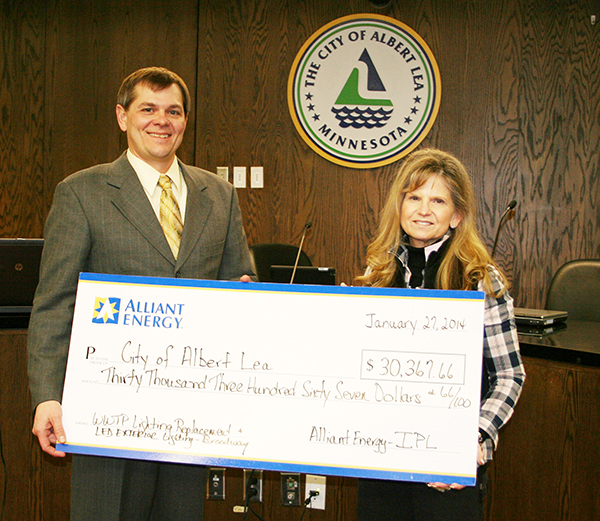 Rebecca Gisel, of Alliant Energy, presents the Albert Lea Mayor Vern Rasmussen with a check for $30,367 for rebates earned at an Albert Lea City Council meeting in January. The city’s wastewater treatment plant replaced its T-12 flourescent fixtures with T-8 fixtures and also fitted its exit signs with LED lights. Alliant Energy’s rebate reimbursed the city for 200 percent of the first year’s cost savings, which equaled $29,847. An additional $520 in rebates was added for using LED lighting on Broadway. Gisel also presented the Council with a check from the Alliant Energy Foundation in the amount of $5,250 to go toward iron benches that would fit the historical character of the downtown area. The foundation is solely funded by Alliant Energy shareholders to provide positive differences in the communities where Alliant Energy has employees, retirees and customers that live and work in the community. — Submitted