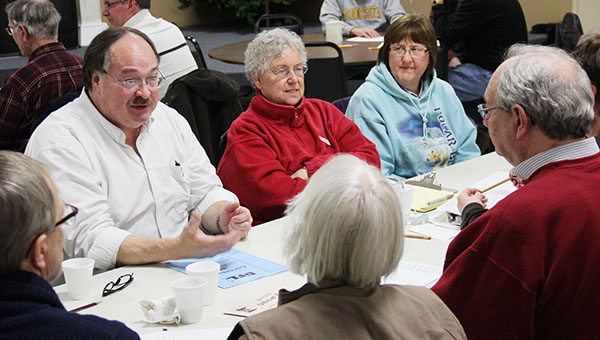 Colin Minehart makes a point in the Ward 2 caucus Tuesday at the gathering for the Freeborn County DFL Party at the Moose Lodge in Skyline Plaza. — Tim Engstrom/Albert Lea Tribune

There were no straw polls at the Freeborn County DFL caucuses. No speeches. In most caucuses, they didn’t pass any resolutions to send up the line. All they did were have some light conversation about politics and go home.

The Republicans divided up by precinct into multiple rooms at Southwest Middle School. They were still going at 8:30 p.m. The DFLers met in a single room in the back of the Moose Lodge and divided by precinct to sit at tables.

Only 53 people attended the DFL caucuses. The caucuses began at 7 p.m. without anyone telling them to begin. They were over by 7:40 p.m.

DFLer Joy Bliss added that being in the minority gives Republicans a strong reason to turn out and plan for change.

“It is different when your part is not in office,” she speculated.

Anderson said the Democrats tend not to take polls on candidates until the conventions.

The caucus for Ward 2 of Albert Lea passed the most resolutions.

On one of them Joan Anderson proposed a resolution favoring the banning of plastic bags like at the grocery store and requiring a deposit on beverage containers. After some debate, she agreed to split the resolution into two. Everyone agreed to banning plastic bags, but the container-deposit resolution passed 7-3 with one abstention.

Colin Minehart, who voted against it, said grocery and convenience stores don’t want the hassle of returning sticky, messy cans and that new recycling bins are doing a good job of increasing the amount of containers that people recycle at home.

Anderson noted that at fairs it can be difficult to find places to recycle pop cans, but if they were worth a nickel, she would imagine the fair boards would have recycling opportunities everywhere.

Ward 6 favored bonding funds for dredging and cleaning Fountain Lake. Ward 5 and Bancroft Township joined caucuses and passed a resolution favoring the preservation of voting rights, such as the early vote, same-day voting and absentee ballots.

Nunda Township resolved in favor of the absolution of the filibuster in U.S. Senate proceedings.

State Rep. Shannon Savick was there mingling, then headed west to caucus in her hometown of Wells.

Click here to read about the Freeborn County Republican caucuses.