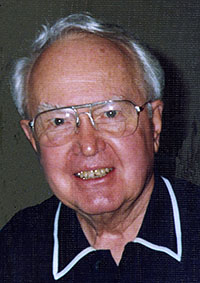 He graduated from high school in Tiffin, attended Heidelberg College and graduated from the University of Cincinnati with a degree in chemical engineering. He was very active and enjoyed his affiliation with Sigma Chi Fraternity. He took his Navy flight training at Purdue University and went on to become a Navy flight instructor during World War II, ending his military service in December 1945. Don applied his chemical engineering background in working for U.S. Gypsum Co. and the DeVilbiss Co.

He was united in marriage to Pauline Gerber on April 1, 1944, in Chicago. While working as a traveling salesman for G.P. Gundlach Co., selling advertising promotion and ingredients to small dairies, he moved his family to Albert Lea, where he and Pauline lived until 1972. During that time, Don continued to be on the road but selling for various companies, including Nashville Display Co. In 1972, they purchased and operated the Hillcrest Motel in Eau Claire, Wis. They later stayed in Eau Claire but continued to live there in retirement. Don and Polly moved back to Albert Lea in August of 1998, to live together at St. John’s Lutheran Community.

He was preceded in death by his parents, twin aunts Clara and Ella Searles, father-in-law William Gerber, mother-in-law Elsie Gerber and wife Pauline.

Don was a loving father, husband, grandfather and great-grandfather, and will be sadly missed by his family and many friends.