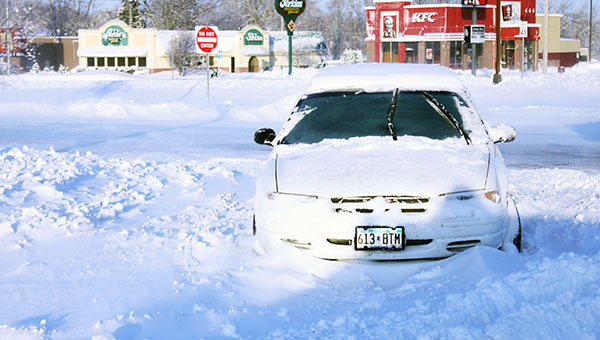 By Sarah Stultz and Tim Engstrom

Interstate 35 was closed early this morning from Owatonna to the Iowa border, and in Iowa, the freeway was closed from Ames to Clear Lake.

Iowa reopened its portion at 7 a.m. today, cautioning drivers to be careful. Minnesota kept its stretch closed as of the Tribune’s 9 a.m. press time.

Belva Heckenlaible and her husband, Roger, had just returned from a trip to Cancun, Mexico, and were headed back to their home in Menno, S.D., after flying in at the Minneapolis-St. Paul International Airport.

Heckenlaible said there were planning to stop in Albert Lea to get something to eat and stay the night, when about a mile north of the city there were whiteout conditions and were unable to see. They were brought into town by a deputy.

She said the roads were tolerable until about 20 miles north of Albert Lea.

“Now when I see people sleeping on cots on TV I can say, ‘Been there, done that,’” she said.

“There shouldn’t be any reason for people to travel,” he said.

Many area school districts canceled classes today as area residents dug themselves out. The region had been in a blizzard warning.

Albert Lea closed today and announced the Fun Nights slated for the elementary schools will be rescheduled.

Riverland Community College was set to open at 11 a.m. today.

The blizzard warning indicated high winds, though the bluster never reached blizzard conditions. The northwest wind topped out at 22 mph with 35 mph gusts around 10 p.m. Thursday.

In Minneapolis, snow started falling around midday and continued during the evening rush hour. The metro area could see up to a foot of snow by the time the storm passes Friday morning, National Weather Service meteorologist Shawn DeVinny said.

“It’s going to be snowing most of the night and not winding down till early tomorrow morning,” DeVinny said Thursday night.

Schools in southern Minnesota closed Thursday, including Rochester, Winona and Faribault as heavy snow and strong winds moved into the region. Minneapolis Public Schools canceled all after-school and evening activities and meetings because of the weather. Minnesota State, Mankato canceled evening classes.

Alicia Halverson, 23, a graduate student at Minnesota State, was doing research at the school library Thursday evening. She lamented that the library was closing early due to the storm.

“It’s horrible. The library and stuff is closing, resources that you need,” Halverson said. She said she is not an outdoor winter enthusiast.

“I do nothing. I just try to stay in and get stuff done that is inside,” said Halverson, who is from the St. Cloud area. She said the continued cold, snowy weather “makes me want to wear sweatpants every day, stay inside.”

After a brief outbreak of mild weather, Minnesota will go back into the deep freeze once the storm passes. The weather service forecasts lows of 5 below zero to 5 above Friday night, with weekend highs ranging from 5 to 15 above.