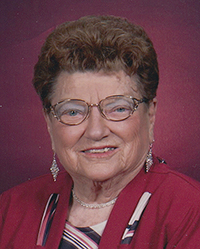 She was born on a farm near Ellendale. She moved to Albert Lea area as a small child. Her parents were Alex Paulson and Stella (Hanson) Paulson. She attended country school and graduated from Albert Lea High School in 1943. After graduation, she worked as a bookkeeper. She married Roland Kelzenberg on Aug. 26, 1947, in Rockford, Iowa, where they lived for a time before moving to the Albert Lea area where they farmed for many years. She and her husband shared their home with several foster children over the years. She was very active in PTA, Farm Bureau Women and the Republican Party, and was a 4-H leader for many years. In October 1972, she and her husband moved to Owatonna. She worked as a bookkeeper at Cedarview Nursing Home and also at what is now known as The Commons. She was a member of the hospital auxiliary. She volunteered for many things, including the Red Cross, Healthy Seniors, food shelf and many others. She enjoyed playing golf, doing crossword puzzles, bridge and card games, traveling and gardening. She enjoyed cooking for her family and friends whenever they could be together. She was a member of First Baptist Church, where she served on boards and committees. She was an active member of the American Baptist Women’s Ministries, where she held many different offices over the years. She enjoyed doing things for others. She has made hundreds of quilts and afghans for the needy and homeless. Her church and her family have always come first in her life. She is survived by her husband, Roland, who together have celebrated 67 happy years; daughters Linda (Dennis) Freitag and Carol (Jon) Gilbert; grandchildren Blane (Jackie) Gilbert, Brian (Tina) Freitag, and Amy (Ted) Cunningham; and four great-grandchildren.