Esther Mae Schneider, 77, of Blooming Prairie, died Tuesday, Feb. 25, 2014, at her home. Esther Mae Barber was born May 9, 1936, in Gordonsville to Vern and Esther (Booen) Barber. She was raised on the family farm and attended school through eighth grade in Rose Creek. On May 9, 1954, she was united in marriage to Mel Schneider at St. Michael’s Lutheran Church in Waltham. They raised their family of six children in the Blooming Prairie area. They were divorced in 1994. Mae worked as a waitress at the Plaza Truckstop and Lansing Corners Supper Club for many years. She was also the bookkeeper for Schneider Grain & Trucking and TS Express. Mae’s many hobbies included growing roses, oil painting ceramics, sewing, crocheting and traveling. She was an excellent cook and enjoyed canning and wine-making. She loved listening to classic gospel music. Mae was a member of First Lutheran Church in Blooming Prairie and the V.F.W. and American legion auxiliary. Her greatest love and joy was her family. 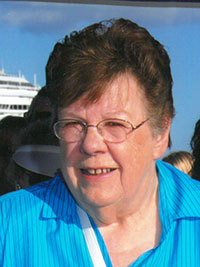 Funeral services will be at 11:00 a.m. Saturday at First Lutheran Church in Blooming Prairie with the Revs. Heidi Heimgartner and Charles Leonard officiating. Visitation will be from 5 to 8 p.m. Friday at Worlein Blooming Prairie Funeral Home, and one hour prior to the service at the church on Saturday. Interment will be in State Line Cemetery, Northwood. Condolences may be expressed to the family online at www.worlein.com.