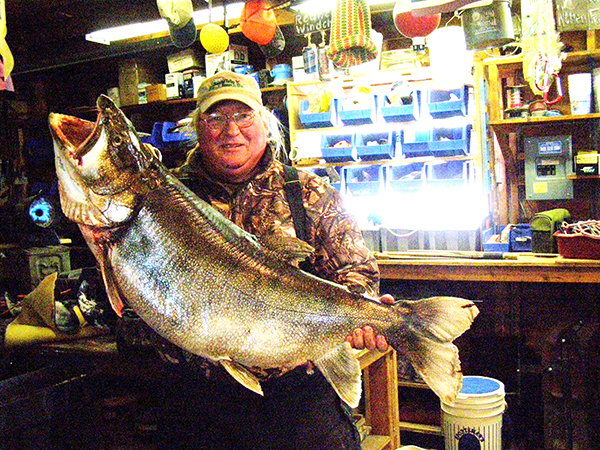 Rob Scott of Crane Lake with a 52-pound 3-ounce lake trout he caught through the ice while fishing Lac la Croix on the Minnesota-Ontario border. The fish was caught about 100 feet onto the Ontario side of the lake. If caught in Minnesota, it easily would have been a state record. — MCT

CRANE LAKE — A possible world-record lake trout caught recently through the ice on the Ontario side of Lac la Croix and brought into Minnesota by snowmobile will soon be returned to Canada.

At issue is whether the fish — which was confiscated Monday from a Duluth taxidermist by a DNR officer — was caught illegally by Rob Scott, 65, of Crane Lake.

Scott conceded in an interview Thursday morning that the fish probably was taken in violation of Ontario law, which limits anglers to one lake trout daily.

On Feb. 8, the day the gigantic laker was pulled through the ice after an hourlong struggle, Scott had previously caught a smaller, 4-pound trout. That fish was on the ice when, coincidentally, two Ontario Ministry of Natural Resources officers on snowmobiles stopped to check Scott’s license — before he caught the larger fish.

Subsequently, one of the Aitkokan, Ontario-based officers read an account of Scott’s big fish in the Star Tribune, and recalled that he and the other officer had checked Scott earlier with the smaller fish.

After catching the bigger fish, Scott gave the smaller fish to a fellow angler, giving him his legal limit of one to return to Minnesota.

Scott said Thursday that even if he had wanted to release the bigger trout, it would have died quickly beneath the ice, given the long time he had spent fighting it.

Ironically, Scott said he was fishing only about 100 feet from the Minnesota side of Lac la Croix, where the lake trout limit is two.

Scott was interviewed at his home Monday evening by two Minnesota conservation officers. One of the officers, Darrin Kittelson of International Falls, said the incident remains under investigation, and that he expected to take possession of the trout soon from another Minnesota DNR officer, before returning it to Ontario authorities.

“I called the Ontario officers Tuesday morning and told them I owed them an apology,’’ Scott said. “It wasn’t illegal for me to keep fishing after I caught the first trout. But when I caught the bigger fish, with the adrenaline and everything I had going, and the fact that it wasn’t going to survive if I released it, I figured if I gave the smaller fish away, that would be OK.’’

The Minnesota officers also have interviewed the angler who received the smaller fish.

The world record for a lake trout caught by tip-up through the ice is currently less than 30 pounds. Scott hadn’t weighed his big trout on an official scale, but presumably that remained an option, given the fish’s excessive size.

However, fish caught in violation of any law are not eligible for record-book status.