ST. PAUL — Joan Mondale was given a grand platform when her husband was elected Jimmy Carter’s vice president in 1976. And she used it.

The avid arts advocate lobbied Congress and the states for more spending on arts programs, and she traveled frequently to museums, theaters and artists’ studios on the administration’s behalf. She was so passionate that she earned the nickname “Joan of Art” and, in the process of pushing her cause, transformed the role of the second lady.

As Carter’s No. 2, Walter Mondale was seen as a trusted adviser and credited with making the office of the vice president more relevant. It was natural that his wife would do the same for her role. Vice presidential aide Al Eisele once said of his boss: “It was important to him that Joan not just be the vice president’s wife, but his partner.” 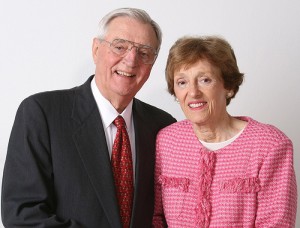 Joan Mondale, herself an avid potter, died Monday afternoon with her husband, sons Ted and William, and other family members by her side, the family said in a statement. She was 83.

“Joan was greatly loved by many. We will miss her dearly,” the former vice president said in a written statement.

The family had announced Sunday that she had gone into hospice care, but declined to discuss her illness.

Walter Mondale, then a Democratic senator from Minnesota, was elected Carter’s vice president in 1976. Soon after, Carter named Joan Mondale honorary chairwoman of the Federal Council on the Arts and Humanities, and she used that role to push for arts programs on the administration’s behalf.

“She was exemplary in using the opportunities public service provided to advance the arts and other issues important to her and many Americans,” Carter and his wife, Rosalynn, said in a statement released late Monday.

Her enthusiasm for the cause earned widespread praise in the arts community, including from Jim Melchert, director of the visual arts program for the National Endowment for the Arts during Carter’s administration.

“Your rare fire has brightened many a day for more people than you may imagine,” Melchert wrote to her after the 1980 Carter-Mondale re-election defeat. “What you’ve done with style and seeming ease will continue illuminating our world for a long time to come.”

Joan Mondale would later take her cultural zeal overseas when her husband was named U.S. ambassador to Japan during President Bill Clinton’s administration.

During her husband’s ambassadorship, Joan Mondale relished the chance to study Japanese art and give dignitaries clay pots she made as gifts. In her 1972 book, “Politics in Art,” Joan Mondale framed a connection between the two.

“Sometimes we do not realize how important our participation in politics is. Often we need to be reminded of our duty as citizens,” she wrote. “Artists can do just that; they can look at our politicians, our institutions and our problems to help us understand them better.”

In a statement, Clinton said he and Hillary Clinton were honored by the Mondales friendship for more than 35 years.

“Joan was as wise and graceful in her role as our nation’s Second Lady as she was unwavering in her support of art and artists,” he wrote.

Minnesota Sen. Amy Klobuchar first met Joan Mondale while working as an intern for the vice president in 1980. Klobuchar still has two coffee mugs on her kitchen table that were made by Joan.

“She was always down to earth,” Klobuchar said Monday. “She was just as happy going out to rural farms in Elmore (Minnesota) as she was mixing it up at fancy receptions at the ambassador’s residence in Japan.”

She was born Joan Adams in Eugene, Ore., on Aug. 8, 1930. She and her two sisters moved several times during childhood as their father, a Presbyterian minister, took new assignments. The family finally settled in St. Paul, Minn., where Joan would earn an undergraduate degree at Macalester College.

It was the same liberal arts school that Walter Mondale attended, but they were a few years apart and didn’t meet until 1955, when one of Joan’s sisters arranged a blind date. Six months later they were engaged, and they married soon after.

She dabbled in Democratic Party politics as a ward chairwoman, though she focused on her family as her husband built a political career that started with state attorney general. Joan tended to a family that would eventually include sons Ted and William and a daughter, Eleanor, who died in 2011 after a long battle with brain cancer.

When Walter Mondale was tapped to fill the Senate seat vacated by Vice President-elect Hubert Humphrey in 1964, the family headed to Washington.

There, Joan Mondale immersed herself in the capital’s art scene. She gave weekly tours at the National Gallery of Art and took pottery lessons. Even when her husband was campaigning as Carter’s vice president, she tried to keep up with regular ceramics classes.

More recently, she sat on the U.S. Postal Service panel that has a role in selecting stamp designs. She gave up her seat on that committee in 2010.

On Monday, President Barack Obama and first lady Michelle Obama noted and praised her many contributions to the arts community.

“Through her contributions to the Federal Council on the Arts and Humanities and the Kennedy Center, she passionately advocated for the role of art in the life of our nation and the promotion of understanding worldwide,” the Obamas said in a statement.

A service is scheduled for Saturday in Minneapolis.