Frances Wayne Nelson, 92, of Fargo, died peacefully on Jan. 20, 2014, due to respiratory complications from pneumonia at Sharp Memorial Hospital in San Diego, Calif. 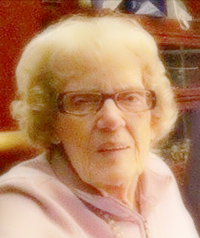 Born Feb. 7, 1921, to Ida and Ferdinand Wayne in Geneva, Frances was the youngest of 12 siblings. As a child, Frances attended schools in Geneva and Ellendale and later received her three-year registered nursing degree from the Naeve Hospital of Nursing in Albert Lea. She worked as an operating room nurse in Albert Lea, St. Peter and Mankato and in Fargo. In 1949, Frances married John Nelson of Geneva and then began a new career working in their orthopedic shoe store, which they owned and operated in Fargo for more than 25 years before retiring in 1982. Volunteering was also an important part of Frances’ life — she devoted more than 30 years at Merit Care in addition to being the pianist at Bethany Nursing Home Chapel in Fargo. Frances’ talents included creating beautiful needlepoint works of art depicting not only her Danish heritage but also Norman Rockwell treasures for her family and friends. After her husband passed away in 2006, Frances moved  to San Diego in 2009 to be nearer to her twin children.

Survivors include a son, Mark (wife, Denise of Fargo); daughter, Mary Holtgrave; granddaughter, Erin; as well as nieces and nephews.

Frances is preceded in death by her husband, siblings and a son-in-law, Michael.

A memorial service will be planned for this summer in Fargo.