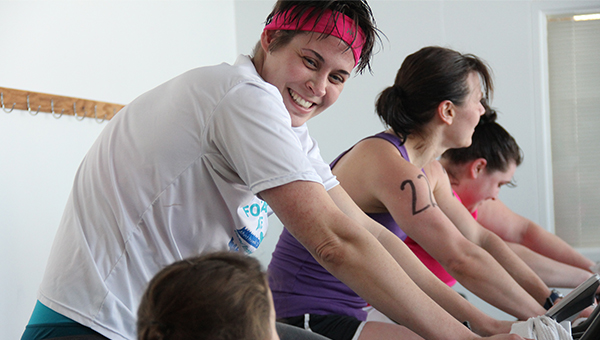 The inaugural Albert Lea Family Y Indoor Triathlon brought friends and family together to compete and cheer each other on.

One thing was for sure; there was no shortage of family support.

Jasmin Murphy was confident her dad, Adam, would win. She said she would probably cheer him on.

Jud Thorson was cheering on his wife, Megan.

“She’s doing really well,” Jud said. “She was a state champion swimmer, and she has been working really hard.”

Megan said she hopes that by competing in the triathlon she will set a good example for her three children, including 6-year-old Macy, who watched as her mom competed on the exercise bike.

“She likes to watch and be my cheerleader,” Megan said. “I hope my good habits will rub off on her.”

As the clock ran out and Megan finished biking, Macy began to clap and cheer.

Will Smith was one of the younger athletes but was not new to triathlons. He worked together with his family, one of only two teams this year.

Smith said he does his best work on the bike.

“My legs are strong and I have been working hard,” Smith said. He has been preparing for almost a year. His dad, Lonnie, was competing on the team.

About 25 people competed this year, according to organizer Susie Hulst. Hulst was approached to do the triathlon because she had done one before.

She worked with Robin Sailor, youth and aquatics director for the Albert Lea Family Y to organize the event. They have been planning since after November.

The triathlon began at 9 a.m. Saturday. Athletes were divided into groups of five, also known as waves. People in each wave were given 10 minutes to do as many laps as they could in the pool. In between the pool, there were 10 minutes for transition. Next, athletes tried to get as many miles as they could on a spinning bike. There were no requirements for resistance. A transition of five minutes was given between the bike and the track. There, athletes had 20 minutes to get as many laps as possible.

The athlete who went the farthest in each event received 100 points. All other scores were given as a percentage based on the highest distance.

“It is a good group of people,” Hendrickson said. “It is good that the Y is finding things for people to do in the winter.”

Hulst and other volunteers hope this triathlon won’t be the last for the Y. They plan to hold it again next year. One possible change they have in mind would be measuring watts on the bike instead of distance. Watts measure effort exerted and would even the playing field between genders. 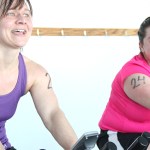 Participants try to get as many miles as they can on an exercise bike. — Tiffany Krupke/Albert Lea Tribune 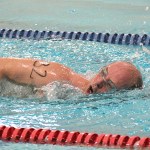 A swimmer races to complete a lap during the triathlon. — Tiffany Krupke/Albert Lea Tribune 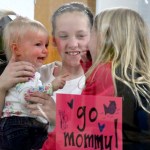 Girls cheer for their mom who is swimming at the triathlon. — Tiffany Krupke/Albert Lea Tribune 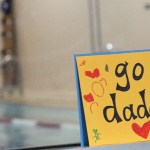 Children made signs to cheer on their father. — Tiffany Krupke/Albert Lea Tribune