She was like a doll. No, she was better than a doll. There was surprise in her eyes. Her nose was a wiggle of mischief. It looked as if stolen gumdrops filled her cheeks and every one of her curls laughed as they bounced. Never has hair had so much fun. 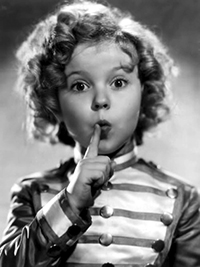 When Shirley Temple Black died Monday night at the age of 85, it felt like the whole world sighed and let out a small, “Aww, heck.”

The heavens did not echo with injustice. Hollywood didn’t collapse in disbelief. Twitter was not astonished and Facebook was not shocked. Headlines did not hint of scandal or tragedy as they often do when the words child and star appear in the same sentence. Everything simply paused for a happy moment of sadness. I’d almost forgotten such a fragile paradox was possible.

For me Shirley Temple was Sunday mornings after Mass. I’d stretch out on the floor, still in my church clothes, and get lost in Shirley’s story, which was usually pretty predictable. A little girl finds herself in a tight spot so she sings and dances her way out of it. Two hours later I’d get up with a face full of carpet rash and proclaim I’d just seen the best movie ever.

Occasionally Mickey Rooney as Andy Hardy would show up in Shirley’s place and throw off my whole Sunday. I needed her. In the volatile inner world of a child, Shirley Temple movies promised that things would always work out no matter how impossible they seemed.

Without Shirley, I would shuffle around the house wondering what she was getting up to without me. My dad would ask, “What happened to Curly Dimple?” and I would giggle, slightly restored.

I loved when he called her that. I never found out if it was a popular nickname for her or his alone. There are some things you don’t have to Google. They’re fine the way they are.

When I mentioned this recollection on Facebook Tuesday morning, several friends from my hometown chimed in with their own Sunday morning Shirley Temple stories. It was one of those occasions when you discover a shared memory.

I don’t know why it surprised me. We only had four channels back then. There was always a good chance you and your friends were watching the same thing at the same time.

Shirley didn’t get her happy endings because she was a princess or because she had magical powers. She stuck her chin out and refused to be defeated. She was always brave, and every little girl wants to be brave. Sometimes there just aren’t a lot of people around who have the time to show us how. Shirley Temple showed us how.

She showed a whole nation. As the Great Depression sucked the air out of the country, Shirley Temple blew it right back in with a spirit that would not be crushed. She did so much to lift morale that even President Franklin Delano Roosevelt promised, “as long as our country has Shirley Temple, we will be all right.”

Her films line a shelf in my living room, waiting for my daughters to discover them. I want to be the one to promise Clara and Gertie that everything will be all right, but I wouldn’t mind some help from “Bright Eyes” or “The Littlest Rebel.” I’m sure there will be days when a song from Curly Dimple will make all the difference.

She was a respected actress and diplomat. She was a mother, grandmother, great-grandmother and a wife of 55 years. Despite her early fame and success, she was no one’s cautionary tale and for that I respect her immensely.

“I was absolutely bathed in love,” she once said about her childhood.

I suspect millions of children felt and still feel the same way when they watch her movies. I know I did. She owns a square in the quilt of our shared youth, the one we tuck under our gumdrop cheeks, the one that catches our breath as we dream of happy endings.

Woodbury resident Alexandra Kloster appears every other Sunday. She may be reached at alikloster@yahoo.com, and her blog is at alexandrakloster.com.