Funeral services will be 10:30 a.m. today at Salem Lutheran Church in Lake Mills with the Rev. Scott Duffus officiating.

Visitation will be one hour prior to the service at the church. 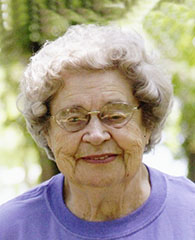 Helga Orlette Anderson was born on June 27, 1919, to Thor and Oline (Lein) Rinden on the Rinden family farm rural Joice, Iowa. She was confirmed at the Free Church in Fertile, Iowa. She graduated in 1938 from Joice High School. On Dec. 16, 1945, she married Ingwald Anderson at the Bethel Lutheran Church rural Joice. Four children were born to this union — Shirley Ann, Marlin, Lois and Paul. Helga and Ingwald farmed near Lake Mills until 1960. They then purchased a farm near Rake, Iowa, where they resided until 1969 when they built their home in Lake Mills. Helga worked at the Lake Mills Meat Locker and then at the Lake Mills Nursing Home until retirement. In 1999 she moved into Mills Harbour Senior Retirement Apartments and resided there until 2011. Due to health reasons, she then moved into the Thorne Crest Retirement Home in Albert Lea.

Family and friends have great memories of Helga’s cooking and baking. She baked and decorated many birthday cakes for family members. She had a great sense of humor and a strong Christian faith. Hugs and “I love you” were expressions Helga often used.

Helga will be greatly missed by her family and friends. Her faith in God and love of life were truly a great example to all who knew her.