Indoors at last for Big Freeze 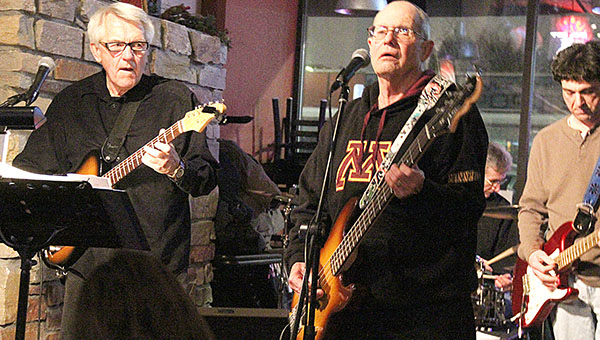 Rush Hour played on Saturday night at the 112 on Broadway as part of The Big Freeze. — Tiffany Krupke/Albert Lea Tribune

After a big day of Big Freeze events at Edgewater Park, people took refuge downtown at the 112 on Broadway.

Participants in several of the events were asked to bring nonperishable food for local food shelves.

The total amount raised isn’t available yet, but look for it in the Albert Lea Tribune.

Participants in the outdoors events of The Big Freeze faced a winter snowstorm Saturday. Albert Lea received 3 to 4 inches, according to the National Weather Service.

The day started calm but as the snow fell the south wind picked up by midday to a steady 15 or 16 mph, without much for gusts. The noon temperature was 12 degrees. The high was 21 degrees — at 8 o’clock at night.

Many of the people at the 112 on Broadway said they were glad to hear live music in downtown Albert Lea.