Funeral services for Joe Pacovsky, 90, of Glenville, will be at 1 p.m. Friday at Bayview/Freeborn Funeral Home. Jake Loper will officiate. Burial will be at Greenwood Cemetery with military honors accorded by the American Legion and VFW honor guard. Visitation will be from 4 to 6 p.m. Thursday at the funeral home. Online condolences are welcome at www.bayviewfuneral.com. 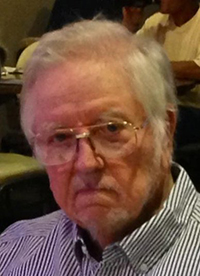 Joseph Pacovsky was born on July 30, 1923, the sixth child of John and Celia (Kral) Pacovsky in Glenville. He attended country school District 100 until 1935, and then he attended elementary school in Glenville. Joe graduated from Albert Lea High School in 1942. He worked for American Gas for one year and then entered the U.S. Army in April 25, 1943, at Fort Snelling. His basic training was in Texas and then at Fort Lewis, Wash., where he got his training for overseas duty. He was in England during the German blitz where he took part in the invasion of Europe receiving several battle stars. He was discharged from the Army on Jan. 17, 1946, where he had held a rating of T5. After his discharge, Joe worked for Queen Stoves. On June 10, 1949, Joe was united in marriage to Elsie Kycek at the First Lutheran parsonage. The couple farmed all of their married life east of Glenville. Joe was a life member of the American Legion, VFW and the Disabled American Veterans. He also was a member of the Eagles and the Western Fraternal Life Association of Hayward Lodge No. 44. Joe enjoyed playing cards, fishing and hunting and listening to the Twins baseball, football and other sports.

Joe was preceded in death by his parents, wife, Elsie, brothers Charley, Louis and Clifford and sisters Blanche Schuhmacher and Viola Bruns.

Memorials preferred to the Greenwood Cemetery or Bohemian Brick Hall Lodge No. 44.