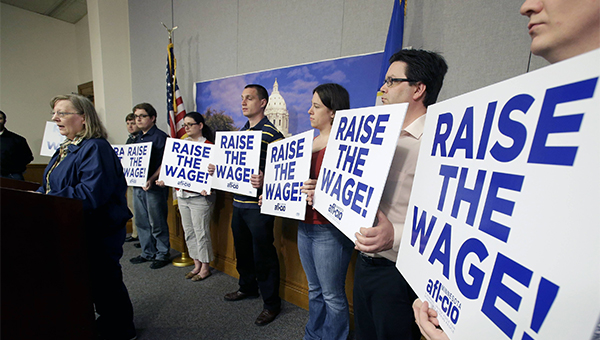 In this April 29, 2013, photo, Lyle Cafe owner Barbara Johnson of Winthrop speaks in support of a bill to raise Minnesota’s minimum wage during a news conference at the State Capitol in St. Paul. — AP

That’s a guiding principle for the Democrats in charge of Minnesota’s Legislature, which gathers Tuesday for an annual session that could extend into mid-May. Party leaders are eager to prevent, or at least contain, controversy that can leave a bad taste for voters or alienate important constituencies in a year when the Democratic House majority and Gov. Mark Dayton’s re-election are on the line.

Lawmakers have an $825 million surplus at their disposal, and few must-do items on their list. House Speaker Paul Thissen acknowledged last week that the session could seem boring to the public compared with the recent past, when stadium and gay marriage debates stirred passions at the Capitol and beyond. 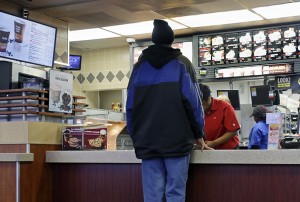 A customer places an order Thursday at a McDonald’s restaurant in St. Paul. The 2014 Legislature will convene Tuesday in St. Paul where Democrats have pledged to raise Minnesota’s minimum wage above its current $6.15 per hour level. — AP

Topping the Democrats’ “must do” list are a borrow-and-build plan for government construction projects and a boost in the state’s minimum wage — “bread-and-butter issues,” as Thissen framed the agenda.

But there’s already friction just below the surface over medicinal marijuana, a costly Senate office building, a confinement program for sex offenders, oversight laws related to the beleaguered health exchange and a new mining venture in northeastern Minnesota. Republicans see openings to expose Democratic rifts, but may encounter limited chances to do so.

Former Attorney General Mike Hatch, a past gubernatorial candidate who has spent decades navigating Democratic Party politics, said he would be surprised if the majority party leaders allow “a big fracas” to materialize and force caucus-splitting votes.

Thissen and Senate Majority Leader Tom Bakk worked hard to keep expectations in check. They deliberately pushed the session’s start until late February and instituted quicker-than-normal deadlines for committees to review bills, which will help separate viable bills from the rest early on.

The budget surplus, which will be revised by state finance officials in a report scheduled for release Friday, is both a blessing and a curse. After years of grappling with deficits, lawmakers won’t be forced into new rounds of spending cuts or tax increases. But there is no shortage of interests angling for a slice of the surplus, and some of them will come away disappointed.

Caregivers for the elderly and disabled want a 5 percent rate increase for home- and community-based services, a request that has drawn nods of support from lawmakers of both parties. It could cost more than $80 million a year by some estimates. Advocates for early childhood education say they’ll be pressing for tens of millions of new dollars to expand scholarships for families who can’t afford to put their youngsters in those programs.

Businesses want lawmakers to undo a batch of sales taxes enacted on select services last year, a bid that has the backing of Dayton, House Democrats and Republicans in both chambers. The same political alignment also wants to extend federal tax preferences for married couples and adoptive parents to state filers.

But Senate leaders haven’t committed to any of those tax changes, which would cost more than $435 million combined.

“We are only one revenue forecast with our head above water after a dozen years of problems,” Bakk said. “This is not a budget year.”

Lawmakers appear to have little choice but to revise a state program for confining dangerous sex offenders after they get out of prison. It’s a politically dicey issue, but last week a federal judge called the system broken. Judge Donovan Frank said he might scrap the program it if lawmakers don’t devise a workable alternative that offers offenders a path to eventual release.

There’s less urgency with other tough topics. A move to legalize the sale of marijuana for people with prescriptions depends on winning over skeptical law enforcement and Dayton. Democratic legislators on both sides of the issue have sparred over Twitter in the session lead-up, but supporters are still hoping for a late breakthrough.

Similarly, there’s a Democratic divide within the party over the proposed PolyMet nickel and copper mine on the Iron Range. Democratic lawmakers from the region see it as a critical jobs measure in a distressed area of the state, but some environmental groups want to block it over pollution concerns.

Minneapolis Rep. Jean Wagenius, a leading Democratic legislator on environmental issues, held a recent hearing on financial aspects of the proposal and came away convinced no legislation to alter an existing environmental and permitting process is necessary.

“I have certainly no intention and I know of no bills out there,” Wagenius said.

That’s reassuring to Rep. Jason Metsa, DFL-Virginia and a project supporter who said having the Legislature step in now would be “like intervening in a Walmart expansion in someone’s district down there.” Earlier this month, he wrote constituents to urge them to be vocal in their PolyMet support in part “to ensure that the DFL does not forget the Iron Range.”

Republican Rep. Joe Hoppe said he figures some of the fractures among Democrats will play out in private. But he’s not convinced the disputes can stay beneath the radar and said Republicans will make sure things like PolyMet and problems with the struggling health exchange, known as MNsure, get aired.

“We’re going to press the point. Both in committee and on the floor we’re going to be talking about PolyMet and jobs and mining,” Hoppe, of Chaska, said. “A lot of that stuff is going to come up.”