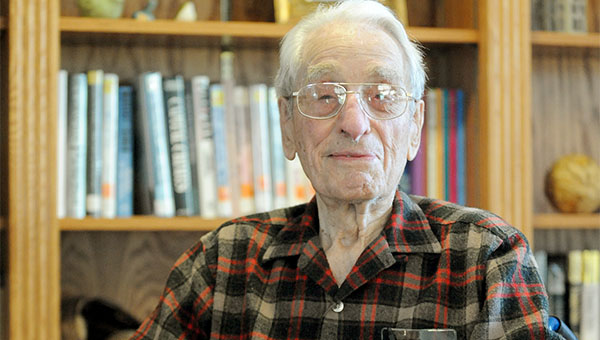 LeRoy Maas, a former teacher and wrestling coach at Albert Lea High School, sits in one of his favorite spots on the Good Samaritan Society premises, the library at Hidden Creek Estates, where he resides. –Micah Bader/Albert Lea Tribune

With the help of his former wrestlers, the presence of LeRoy Maas continues to be felt at Albert Lea High School.

However, the man who founded the Tigers wrestling program and coached from 1943 to 1957 doesn’t take the mat to teach takedown techniques these days. At 96, Maas helps promising student-athletes in a different capacity.

The LeRoy Maas Scholarship awarded $71,000 to 56 athletes affiliated with the Tigers wrestling program. Maas is the scholarship’s largest donor.

“He’s still focused on doing good things,” said Lyman ‘Manny’ Steil, a former wrestler in Maas’ program who graduated from Albert Lea High School in 1956. “He’s a very proud man in terms of what he’s done for kids over the years.”

Steil had the idea for the scholarship, and it was made a reality in June of 1996.

According to Frank Gallagher — a former wrestler who Maas affectionately calls his “little 103-pounder” — Maas went above and beyond the call of duty as a coach.

“Mr. Maas was like a father to me,” said Gallagher, whose father died when he was 3 years old. “He was quite a gentleman and a teacher, and he stood behind his students. You can see that in the way they still go back to visit him.”

Maas — who lives at the Hidden Creek Estates area of Good Samaritan Society of Albert Lea — said he remains in contact with many of his former wrestlers, and his days are brightened when they’re able to catch up.

When Maas was coaching, he was knowledgeable about his craft, said Pete Veldman, the 1951 heavyweight state champion and a 1951 graduate of Albert Lea.

“At practice he was organized and enthusiastic — always willing to work with you,” he said. “If you’d listen, you’d learn a lot.”

When Maas was hired, he said he was told to instill discipline, which is something his wrestlers remembered.

“When I started, they said ‘We want discipline,’” Maas said. “So I gave them discipline. I had them duck walk if they screwed up. They’d have to squat down and walk. That’s hard to do.”

Equipment the first few years was scarce for the Tigers.

“There was no schedule from the year before. There were no uniforms. No wrestling room. No mats,” Maas said.

Albert Lea’s wrestlers made due with the mats from behind the basketball hoops in the gym.

Maas, a former collegiate hockey and football player, had no previous experience on the mat, so he educated himself on the subject by going to clinics and reaching out to other wrestling coaches.

After speaking with Mason City’s head coach, Maas decided to take his team down to Iowa to practice.

“I arranged it so I could take my kids down on the bus, and our kids would wrestle their kids,” Maas said. “His kids were coaching my kids, and they were happy to help.”

“That’s starting from scratch,” he said.

Albert Lea’s program improved and qualified for the state tournament five times as a team under his guidance.

Maas said he worked long hours, but it wasn’t really work because he loved his job.

“I was there from the first thing in the morning to the last thing at night, and I enjoyed it,” he said. “I’ve had so many kids in school, and I love my work.”

Aside from coaching wrestling, football and track and field, and teaching physical education and social studies, Maas was the director of the Albert Lea Parks and Recreation Program, and he organized the Albert Lea Figure Skating Club.

Since Maas made a positive impact in the lives of his former athletes, Steil said he coined the phrase that Maas is “the water that primed the pump for thousands.” He added that Maas is still pumping with the help of his endowed scholarship.