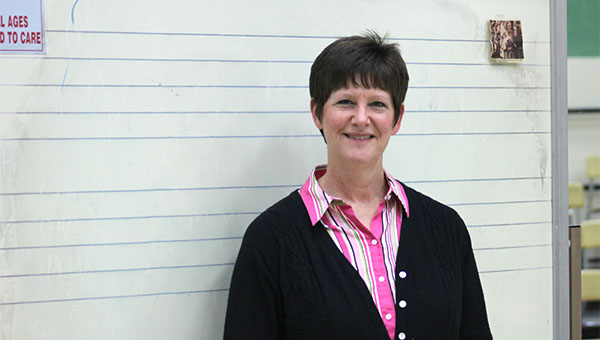 Diane Heaney loves music and her students. Being selected as an outstanding vocal educator for Choral Director magazine was just a bonus.

“I have been striving for excellence my whole life,” Heaney said.

Heaney is highlighted as director of note alongside 11 other directors nationwide in the January/February issue.

The feature lists Heaney’s goals as an educator, an important lesson she learned about teaching and her proudest achievement in the classroom.

Heaney has been teaching at Albert Lea High School since 1993. She teaches music to about 300 students.

Growing up, Heaney played the organ for her church. She wasn’t good at singing when she started.

“I had to train and practice to make my voice what it is,” Heaney said.

Heaney sings as a soloist and has been in Albert Lea Community Theatre in productions of “Swing,” “Smokey Joe’s Café,” “My Way” and “Happy Days.” She is also a church organist.

She resides in Alden with her husband and son. She looks forward to upcoming choir concerts with her favorite part of the job – her students.

Goals as educator: I must make the effort to reach every student in some way to try to make a positive impact on his or her life. Some are easier to reach than others, and some won’t realize what they got out of their high school experiences until much later, but every student is worth the battle. I try to teach with passion about the music and about the process of making music every day. I don’t teach my choirs great music for me; I teach them great music for them, and how it feels to perform with pride after working so hard to get it right.

Most important lesson learned about teaching: There are many reasons why students sing in a choir. Some of those reasons have very little to do with the actual music. As a musician, this is sometimes frustrating, but as a teacher, I must remember this every day. It is very powerful to belong to a successful organization, one that has pride and commitment from its members. It is wonderful to work hard to create beautiful music, beautiful memories and to feel like they were an important part of the process and the product. The longer I teach I realize that it is the impact of each student that makes the difference. Students will remember the feeling of success long after the notes and rhythms are forgotten.

Proudest achievement in the classroom: We have had our share of guest performances and honors over the years. Perhaps I am proudest of the fact that there has been a tradition of quality set in our community since my tenure here. It is hard work to maintain high standards year after year with all the changes and demands on students’ time and energy. I love getting notes from former students sharing their gratitude…